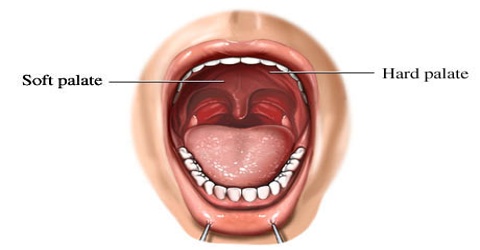 Soft palate is the roof of the mouth in vertebrate animals, separating the mouth from the passages of the nose. It is the posterior muscular extension of the hard palate which together makes up the palate of the oral cavity and the floor of the nasal cavity. It is also known as the velum or muscular palate. 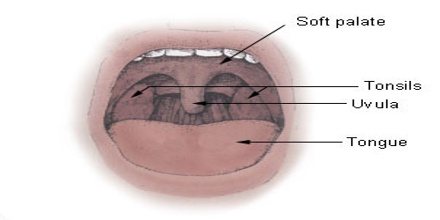 The soft palate is distinguished from the hard palate at the front of the mouth in that it does not contain bone. Pathology of the soft palate includes mucosal lesions such as pemphigus vulgaris, herpangina and migratory stomatitis, and muscular conditions such as the congenital cleft palate and cleft uvula.

Structure and Functions of Soft Palate

Soft palate is composed of muscle and connective tissue, which give it both mobility and support. This palate is very flexible. When elevated for swallowing and sucking, it completely blocks and separates the nasal cavity and nasal portion of the pharynx from the mouth and the oral part of the pharynx. While elevated, the soft palate creates a vacuum in the oral cavity, which keeps food out of the respiratory tract. 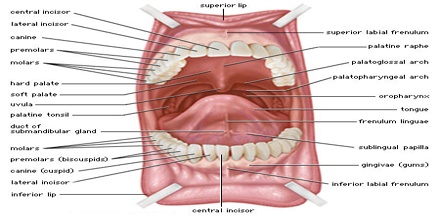 The five muscles of the soft palate play important roles in swallowing and breathing. The muscles are:

These muscles are innervated by the pharyngeal plexus via the vagus nerve, with the exception of the tensor veli palatini.

The soft palate is multi functional and aids speech and the pronunciation of velar consonants along with the dorsum of the tongue. When swallowing, it rises to close the nasal passages and prevent any food or liquid from entering into the nasal cavity. It does the same thing for the larynx when sneezing. The uvula helps produce the gag reflex when touched.

In humans, the uvula hangs from the end of the soft palate. Research shows that the uvula is not actually involved in the snoring process. This has been shown through inconsistent results from uvula removal surgery.