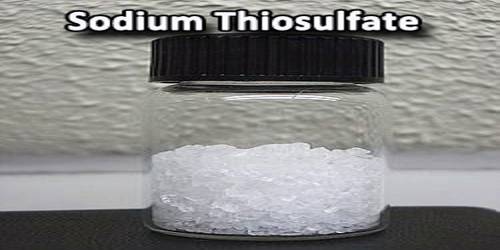 Sodium thiosulfate is a colorless crystalline compound, stable on air up to 80 °C, in vacuum decomposes at 300 °C to sodium sulfite and sulfur. It is an inorganic compound with the formula Na2S2O3.xH2O. Typically it is available as the white or colorless pentahydrate, Na2S2O3·5H2O. The solid is an efflorescent (loses water readily) crystalline substance that dissolves well in water. It is also called sodium hyposulfite or “hypo”. 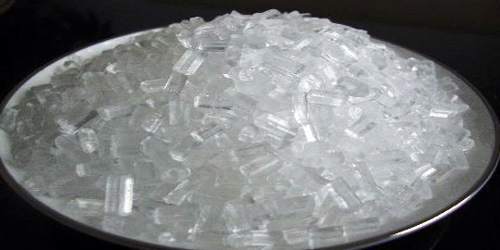 It is used in conjunction with sodium nitrite as an antidote in cyanide poisoning, as a fungicide in swimming pools and baths, and as a means to measure the extracellular fluid volume of the body.

The chemical formula of sodium thiosulfate is Na2S2O3 and its molar mass is 158.11 g/mol. It is also available as its pentahydrate salt (Na2S2O3.5H2O), with a molar mass of 248.18 g/mol. It is an ionic compound composed of two sodium cations (Na+) and the negatively charged thiosulfate anion (S2O3–), in which the central sulfur atom is bonded to three oxygen atoms and another sulfur atom, all through single and double bonds with resonance character. The solid exists in a monoclinic crystal structure. 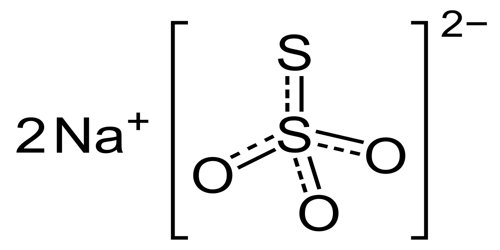 Two polymorphs are known of the pentahydrate. The anhydrous salt exists in several polymorphs. In the solid state, the thiosulfate anion is tetrahedral in shape and is notionally derived by replacing one of the oxygen atoms by a sulfur atom in a sulfate anion. The S-S distance indicates a single bond, implying that the terminal sulfur bears significant negative charge and the S-O interactions have more double-bond character.

At room temperature, sodium thiosulfate is found in powdered or colorless crystal form. Here are some basic facts about this compound: 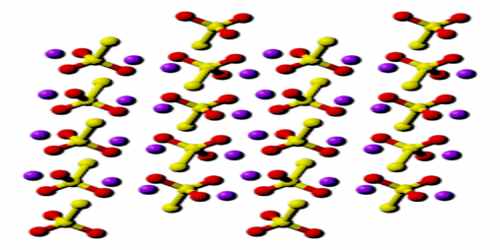 Uses and Effects of Sidium Thiosulfate

Sodium thiosulfate is used in several pharmaceutical preparations and also has various medicinal properties. It is used as an antidote to cyanide poisoning. It has been used as a treatment of calciphylaxis in hemodialysis people with end-stage kidney disease. It is also used in the management of extravasations during chemotherapy. Sodium thiosulfate prevents alkylation and tissue destruction by providing a substrate for the alkylating agents that have invaded the subcutaneous tissues. 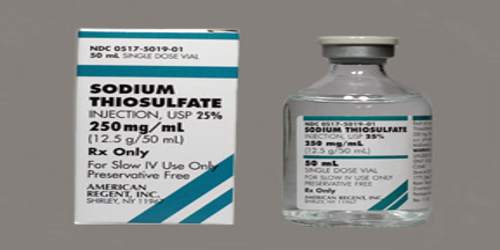 Apart from its medical uses, it also has applications in water treatment, neutralizing bleach, leather tanning, gold extraction, photographic processing, and chemical heating pads. It is also used for both film and photographic paper processing; the sodium thiosulfate is known as a photographic fixer and is often referred to as ‘hypo’, from the original chemical name, hyposulphite of soda.