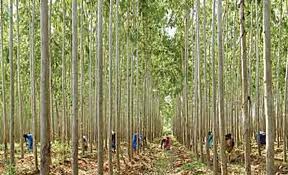 Social Forestry a forestry which aims at ensuring economic, ecological, and social benefits to the people, particularly to the rural masses and those living below poverty line, specially by involving the beneficiaries right from the planning stage to the harvesting stage. The target of the social forestry is the ‘rural poor’ and not the ‘tree’ alone. This support, however, is not just to ensure that the trees get planted and survive but rather to ensure that the people who plant the trees receive adequate sustenance to live with dignity before reaping the harvest from the raised crops. FAO defined social forestry as ‘any situation which intimately involves local people in a forestry activity’. It excludes large scale industrial forestry and other form of forestry which contributes to development solely through employment and wages, but includes activities by forestry industries and public services to encourage and assist forestry activities at a community level.

The history of social forestry in Bangladesh is linked with the institutional approach to the introduction of forest extension services in the Forest Department. During 1962-63, two forest extension divisions, one at Rajshahi and other at Dhaka were created and the tree planting day on 1st June was introduced. Since the creation of the forest extension division for raising and distributing of seedlings, a gradual expansion of activities took place. The activities, however, remained confined in the establishment of nurseries and ceremonial planting in the district headquarters and some important centres. Tree planting campaign initially was for a day which later extended to a week, then a month and subsequently to three months period. The programme activity initially was small and it never created impact on people. The activities failed to bring any change in the outlook of extension personnel or change in the mind of common people. No thought was given to the utilization of landless people and their involvement in the forestry activities.

Social forestry project in Bangladesh was taken up by entrepreneurs like Mahbubul Alam Chashi, Mohammad Eunus and Abdul Alim at Betagi and Pomora, two remote denuded hills in Rangunia thana of Chittagong district. One hundred one families were selected for the purpose and land was given to them.

The programme was a self-help type and needed to be self reliant. The inducted farmers were not to receive any outside grant. Krishi Bank (Agricultural bank) advanced loan on condition that workers of Grameen Bank to distribute and recover the loan. The programme was evaluated in the second and third year and found to be satisfactory. However, the number of participants reduced to 83 families from the initially inducted 101 families. The lessons learnt from the project helped in the development of further programmes.

Social forestry in real sense of the term started with the Asian Development Bank (ADB) financed community forestry project. ADB sanctioned a loan of 11 million US dollar and United Nations Development Programme allotted 2.0 million dollar through Food and Agricultural Organisation as technical assistance. Project activities started in 1982 and completed in 1987 in seven districts, namely Dinajpur, Rangpur, Pabna, Rajshahi, Bogra, Kushtia and Jessore. The objective of the project was to increase supply of fuelwood, fodder, small timbers, fruits and other products. The project was designed to act as catalyst by creating community awareness with permanent institutional capacity.

The main components of the project were: establishment of about 4800 km strip plantations along road, railway, and canal embankments; adopting participatory approach in raising fuelwood plantation in 4800 ha, and demonstrative agroforestry farms in 120 ha in the denuded forest land; establishing a social forestry training institute at Rajshahi; providing equipment and training to staff as part of institutional support; imparting training to various categories of people to create awareness among them; and establishment of regional office and division office within the project area.

The project exhibited overall success in meeting the target and also as an initiative in the integration of the people in forestry activities. For the first time it brought in women as participant of community forestry programme.

The Asian Development Bank was pleased with the overall performance of the community forestry project and sanctioned ‘Upazila Afforestation and Nursery Development’ project as a follow up. This was a countrywide project covering all parts except the Sundarbans and greater Chittagong Hill Tracts districts.

The component-wise targets of the project were: raising of plantations in the depleted sal forest over an area of 16,194 ha involving local people; establishment of agro-forestry farms in the denuded and encroached sal forest over 3289 ha following participatory approach; afforestation of 810 ha outside the area of Water Development Board; development of 8, upgrading of 32, and maintenance of 51 community forestry growth centres by renaming them as Forestry Extension Nursery and Training Centres (FENTC); raising and distribution of 40-48 million seedlings during project period; imparting training to about 75,000 village leaders, block supervisors and upazila agriculture officers, plantation assistants, gardeners, staff, and officers of Forest Department; establishment of another 345 nurseries in the upazila complexes; establishment of 17,760 km strip plantation along road, railway, and canal embankments; raising and distribution of 10.97 million seedlings from the newly established upazila nurseries; and helping in establishing 100 private nurseries by encouraging entrepreneurs with training and financial assistance.

Another participatory social forestry project financed by Asian Development Bank is the Coastal Green Belt project started in 1994-95. It is based on the Asian Development Bank’s upazila Afforestation and Nursery Development Projects theme. The project area includes 10 districts of the coastal zone. The objective of the project is to reduce loss of life and damage to property caused by cyclones through increased vegetative cover in the project area. Increasing the vegetative cover will be realized by the promotion of coastal tree planting activities among the local population with the involvement of non-government organisations (NGOs).