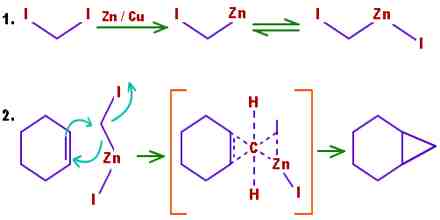 Simmons Smith Reaction is treated with methylene iodide (CH₂I₂) in the presence of a zinc-copper couple, a cyclopropane derivatives are formed. This reaction is called Simmons-Smith raction.Various research groups have developed variants of the Simmons-Smith cyclopropanating reagent through the replacement of the iodide ligand on the zinc atom with a strongly electron-withdrawing substituent. Whereas the original reagent often requires a directing group such as the hydroxyl of an allylic alcohol, carbenoids such as CF3CO2ZnCH2I and (PhO)2P(O)OZnCH2I.