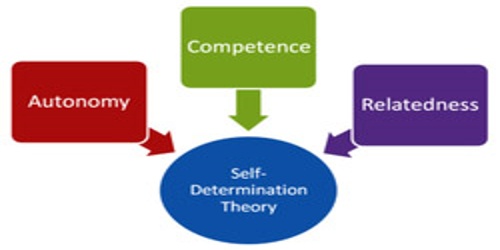 Self Determination Theory (SDT) is an approach to human motivation and personality that uses traditional empirical methods while employing an organismic meta-theory that highlights the importance of human’s evolved inner resources for personality development and behavioral self-regulation. It is concerned with the motivation behind choices people make without external influence and interference. SDT focuses on the degree to which an individual’s behavior is self-motivated and self-determined. Thus, its arena is the investigation of people’s inherent growth tendencies and innate psychological needs that are the basis for their self-motivation and personality integration, as well as for the conditions that foster those positive processes.

In the 1970s, research on SDT evolved from studies comparing the intrinsic and extrinsic motives, and from growing understanding of the dominant role intrinsic motivation played in an individual’s behavior but it was not until the mid-1980s that SDT was formally introduced and accepted as a sound empirical theory. Research applying SDT to different areas in social psychology has increased considerably since the 2000s.

Self-determination theory grew out of the work of psychologists Edward Deci and Richard Ryan, who first introduced their ideas in their 1985 book Self-Determination and Intrinsic Motivation in Human Behavior. They developed a theory of motivation which suggested that people tend to be driven by a need to grow and gain fulfillment.

Two key assumptions of the theory:

The need for growth drives behavior. The first assumption of self-determination theory is that people are actively directed toward growth. Gaining mastery over challenges and taking in new experiences are essential for developing a cohesive sense of self.

Autonomous motivation is important. While people are often motivated to act by external rewards such as money, prizes, and acclaim (known as extrinsic motivation), self-determination theory focuses primarily on internal sources of motivation such as a need to gain knowledge or independence (known as intrinsic motivation).

Self-Determination Theory (SDT) is centered on the belief that human nature shows persistent positive features, with people repeatedly showing effort, agency, and commitment in their lives that the theory calls “inherent growth tendencies”. People also have innate psychological needs that are the basis for self-motivation and personality integration.

These needs are seen as universal necessities that are innate, not learned (instinctive), and seen in humanity across time, gender, and culture.

Deci and Ryan claim that there are three essential elements of the theory:

To actualize their inherent potential they need nurturing from the social environment.

If this happens there are positive consequences (e.g. well being and growth) but if not, there are negative consequences. So SDT emphasizes humans’ natural growth toward positive motivation; however, this is thwarted if their basic needs are not fulfilled.

Imagine a person who fails to complete an important project at work. If this person is high in self-determination, they will admit their fault, believe that they can do something to fix the problem, and take action to correct the mistake.

If that same person was low in self-determination, they might instead look for other things that they can blame. They might make excuses, assign blame, or refuse to admit that their own role. Most importantly, perhaps, is that this person won’t feel motivated to fix the mistake. Instead, they might feel helpless to control the situation and believe that nothing that they do will have any real effect.