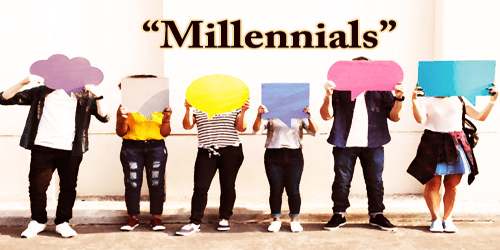 Millennials, also known as Generation Y (or simply Gen Y), because it comes after Generation X those people between the early 1960s and the 1980s. The publication Ad Age was one of the first to coin the term “Generation Y”, in an editorial in August 1993. But the term didn’t age well, and “Millennials” has largely overtaken it. But the terms basically mean the same thing. This generation is generally marked by elevated usage of and familiarity with the Internet, mobile devices, and social media, which is why they are sometimes termed, digital natives. The Great Recession and Coronavirus recession have had a major impact on this generation because they have caused historically high levels of unemployment among young people.

The term was coined by historians Neil Howe and William Strauss in 1991. In their book, “Generations”, millennial was chosen to aptly reflect the result of their research which reflected that such generation is highly distinctive as compared to the baby boomers. Moreover, they had thought about the oldest millennials graduating from high school in the year 2000, which was a famed year in the 90s. Howe and Strauss predicted that during the adulthood of the majority of the millennials, family ties would be stronger, criminal behavior would be lessened, and those in their 20s would take less risks. Apparently, these predictions all came true. The millennials are also knowns as “Generation Y” or “the me generation” due to the claim that they are prone to be self-centered.

Millennials are sometimes called Echo Boomers, due to them often being the offspring of the baby boomers, the significant increase in birth rates from the early 1980s to mid-1990s, and their generation’s large size relative to that of boomers. In the United States, the echo boom’s birth rates peaked in August 1990 and a twentieth-century trend toward smaller families in developed countries continued. Psychologist Jean Twenge described millennials as “Generation Me” in her 2006 book Generation Me: Why Today’s Young Americans Are More Confident, Assertive, Entitled and More Miserable Than Ever Before, while in 2013, Time magazine ran a cover story titled Millennials: The Me Me Me Generation. Alternative names for this group proposed include the Net Generation, Generation 9/11, Generation Next, and The Burnout Generation.

Millennials are those who grew up using electronics, the Internet, and online social communities. According to DMR (Digital marketing Ramblings) the millennial generation spends 18 hours per week on their smartphone, makes up 25 percent of the US workforce, and are the largest group to use a coupon for Internet shopping. Some facts offered by Pew Research Center suggest that millennials are likely to be college graduates and are the generation most likely to live at home between the ages of 25 and 35.

Millennials have been characterized in a number of different ways. On the negative side, they’ve been described as lazy, narcissistic and prone to jump from job to job. The 2008 book “Trophy Kids” by Ron Alsop discusses how many young people have been rewarded for minimal accomplishments (such as mere participation) in competitive sports, and have unrealistic expectations of working life.

American sociologist Kathleen Shaputis labeled millennials as the Boomerang Generation or Peter Pan Generation because of the members’ perceived tendency for delaying some rites of passage into adulthood for longer periods than most generations before them. These labels were also a reference to a trend toward members living with their parents for longer periods than previous generations. Kimberly Palmer regards the high cost of housing and higher education, and the relative affluence of older generations, as among the factors driving the trend. Questions regarding a clear definition of what it means to be an adult also impact a debate about delayed transitions into adulthood and the emergence of a new life stage, Emerging Adulthood. A 2012 study by professors at Brigham Young University found that college students were more likely to define “adult” based on certain personal abilities and characteristics rather than more traditional “rite of passage” events. Larry Nelson noted that “In prior generations, you get married and you start a career and you do that immediately. What young people today are seeing is that approach has led to divorces, to people unhappy with their careers … The majority want to get married (…) they just want to do it right the first time, the same thing with their careers.”

From various research whitepapers and publications, here are some interesting facts about the millennial generation:

Psychologist Jean Twenge, the author of the 2006 book Generation Me, considers millennials, along with younger members of Generation X, to be part of what she calls “Generation Me”. Twenge attributes millennials with the traits of confidence and tolerance but also describes a sense of entitlement and narcissism, based on NPI surveys showing increased narcissism among millennials[quantify] compared to preceding generations when they were teens and in their twenties. Psychologist Jeffrey Arnett of Clark University, Worcester has criticized Twenge’s research on narcissism among millennials, stating “I think she is vastly misinterpreting or over-interpreting the data, and I think it’s destructive.” He doubts that the Narcissistic Personality Inventory really measures narcissism at all. Arnett says that not only are millennials less narcissistic, but they’re also “an exceptionally generous generation that holds great promise for improving the world.” A study published in 2017 in the journal Psychological Science found a small decline in narcissism among young people since the 1990s.

A 2012 study found Millennials to be “more civically and politically disengaged, more focused on materialistic values, and less concerned about helping the larger community than were GenX (born 1962-1981) and Baby Boomers (born 1946 to about 1961) at the same ages,” according to USA Today. “The trend is more of an emphasis on extrinsic values such as money, fame, and image, and less emphasis on intrinsic values such as self-acceptance, group affiliation, and community.” The study was based on an analysis of two large databases of 9 million high school seniors or entering college students.

They have also been described in positive ways. They are generally regarded as being more open-minded, and more supportive of gay rights and equal rights for minorities. Other positives adjectives to describe them include confident, self-expressive, liberal, upbeat, and receptive to new ideas and ways of living.