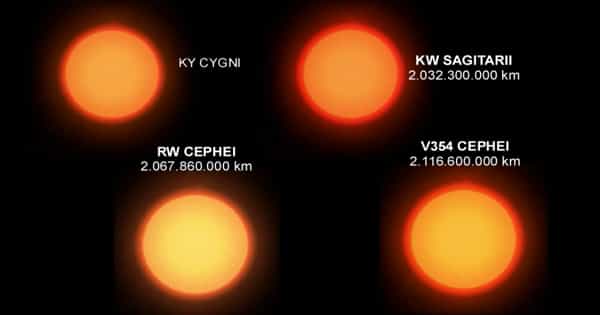 RW Cygni is an extremely bright Supergiant Star. It is a semiregular variable star in the constellation Cygnus, about a degree east of γ Cygni, the second magnitude. It is not part of the outline of the Cygnus constellation, but it is within its boundaries. It has an apparent magnitude of 8.05 to 9.70 and a spectral type of M3 or M4. RW Cygni’s color and type are red supergiant stars based on the spectral type of M3Iavar.

The parallax for RW Cyg in Gaia Data Release 2 is 0.4602±0.0897 mas, which corresponds to a distance of about 2.2 kpcs. RW Cygni is thought to be a member of the Cygnus OB9 Stellar Association and is thus 3,600 light-years away from the solar system. It has an apparent magnitude of 8.22, which is a measurement of the star’s brightness as seen from Earth. Visual Magnitude is another name for Apparent Magnitude. RW Cygni is 1.62 kpcs away, according to newer observations based on the parallaxes of nearby OB stars.

RW Cygni is a bright red supergiant with a bolometric luminosity greater than 100,000 L☉. Its spectral type is given as M2-4Ia-Lab in the General Catalogue of Variable Stars, covering the range of previously published values. It has been designated as a standard star for the M3-M4Ia-Lab spectral classification. In 2005, the effective temperature was calculated to be 3,600 K, resulting in a radius of 980 R☉. An alternative calculation yields a higher temperature of 3,920 K and a lower radius of 680 R☉.

More recent measurements based on its Gaia Data Release 2 parallax yield a similar effective temperature derived in 2005 and a larger radius of 1,000 R☉, making RW Cygni one of the largest known stars. Using a more conservative estimate, if it were placed in the center of the Solar System, it would extend past Mars’ orbit and into the Asteroid Belt.

RW Cygni is a red supergiant with the spectral type M2-4Ia-Lab and a temperature of 3,920 K. It is a massive supergiant with a radius ranging from 680 to 980 solar radii. Using the more conservative figure, if it is placed in the center of the Solar System, it will extend beyond Mars’ orbit. However, it is dwarfed in size by other stars in the constellation Cygnus, such as KY Cygni, NML Cygni, and BC Cygni. With a mass of about 20 solar masses, their stellar mass loss in powder form is estimated to be 3.2×10-9 solar masses per year.

RW Cygni is classified as a semiregular variable star SRC, with a period of approximately 580 80 days and a brightness ranging from +8.0 to +9.5. The initial mass of RW Cygni has been estimated to be around 20 M based on its position relative to theoretical stellar evolutionary tracks. According to observations of its atmosphere, it is losing mass at a rate of 3.2×106 M per year.

RW Cygni is a variable star with a semiregular orbit. It has the subtype SRc, which indicates that it is a cool supergiant. Its brightness varies between magnitudes +8.0 and +9.5 over a period of 580 ±80 d. There was no evidence of a long secondary period.