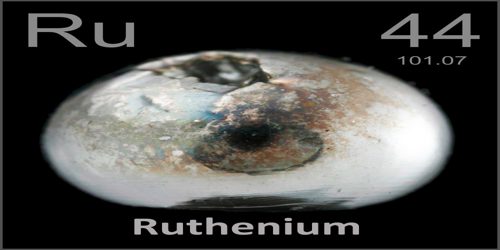 Ruthenium (symbol Ru) is a rare, silvery-gray metallic element that is hard, brittle, and very resistant to corrosion. It is a rare transition metal belonging to the platinum group of the periodic table. Like the other metals of the platinum group, ruthenium is inert to most other chemicals. Its atomic number 44; atomic weight 101.07; melting point 2,310°C; boiling point 3,900°C; specific gravity 12.41; valence 0, 1, 2, 3, 4, 5, 6, 7, 8. It is used to harden alloys of platinum and palladium for jewelry and electrical contacts. 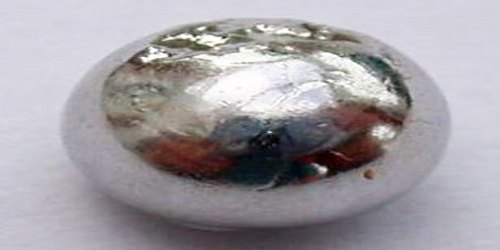 The Polish chemist Jedrzej Sniadecki was investigating platinum ores from South America and, in May 1808, when he discovered a new metal which he called it vestium. However, when French chemists tried to repeat his work they were unable to find it in the platinum ore they had. When Sniadecki learned of this he believed he had been mistaken and withdrew his claim.

Then, in 1825, Gottfried Osann of the University of Dorpat (now Tartu) on the Baltic, investigated some platinum from the Ural mountains, and reported finding three new elements which he named pluranium, polinium, and ruthenium.

Most ruthenium produced is used in wear-resistant electrical contacts and thick-film resistors. A minor application for ruthenium is in platinum alloys and as a chemistry catalyst.

Occurrences, Production and Properties of Ruthenium

Ruthenium is one of the rarest metals on Earth. It is found uncombined in nature; however, it is more commonly found associated with other platinum metals in the minerals pentlandite and pyroxinite. It is obtained commercially from the wastes of nickel refining. Ruthenium has a low crustal abundance of about 0.001 part per million. Elemental ruthenium occurs in native alloys of iridium and osmium, along with the other platinum metals: up to 14.1 percent in iridosmine and 18.3 percent in siserskite. It also occurs in sulfide and other ores in very small quantities that are commercially recovered. 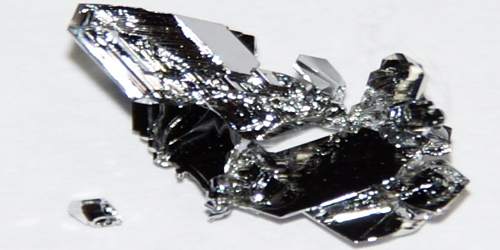 This element is generally found in ores with the other platinum group metals in the Ural Mountains and in North and South America. Small but commercially important quantities are also found in pentlandite extracted from Sudbury, Ontario, Canada, and in pyroxenite deposits in South Africa. The native form of ruthenium is a very rare mineral.

Roughly 12 tonnes of ruthenium are mined each year with world reserves estimated as 5,000 tonnes. The composition of the mined platinum group metal (PGM) mixtures varies widely, depending on the geochemical formation.

Ruthenium is a hard, silvery-white metal with a shiny surface. Its melting point is about 2,300 to 2,450°C (4,200 to 4,400°F) and its boiling point is about 3,900 to 4,150°C (7,100 to 7,500°F). Its density is 12.41 grams per cubic centimeter. Its metal is relatively unreactive. It does not dissolve in most acids or in aqua regia. Aqua regia is a mixture of hydrochloric and nitric acids. It often reacts with materials that do not react with either acid separately. Ruthenium does not react with oxygen at room temperatures either. At higher temperatures, however, it does combine with oxygen. 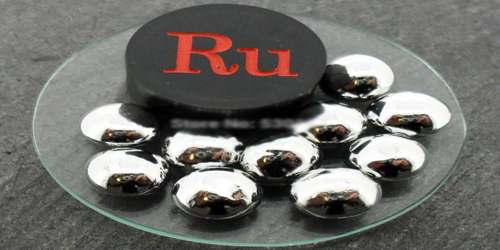 One important use of ruthenium is in the manufacture of alloys. An alloy is made by melting and mixing two or more metals. Many new uses are emerging for ruthenium. Most is used in the electronics industry for chip resistors and electrical contacts. Ruthenium oxide is used in the chemical industry to coat the anodes of electrochemical cells for chlorine production. Ruthenium is also used in catalysts for ammonia and acetic acid production. Ruthenium compounds can be used in solar cells, which turn light energy into electrical energy.

Ruthenium is one of the most effective hardeners for platinum and palladium, and is alloyed with these metals to make electrical contacts for severe wear resistance. It is used in some jewellery as an alloy with platinum.