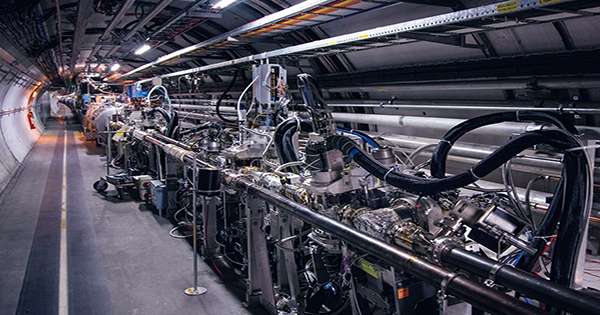 Neutrinos Detected For the First Time at Brand-New CERN Experiment

Neutrinos, the most elusive of known particles, have been discovered at the world’s most powerful particle accelerators. Because neutrinos are so light and have no charge, they only interact seldom. Examining the one created by such a strong accelerator will reveal fresh information about their nature. The discovery, which was published in the journal Physical Review D, is the first of its kind at a particle accelerator. During its pilot testing in 2018, the FASER particle detector caught just six of these particles.

“No indication of neutrinos has ever been found at a particle collider prior to this experiment,” said co-author Jonathan Feng, UCI Distinguished Professor of physics and astronomy and co-leader of the FASER Collaboration. “This remarkable achievement is a step toward a better understanding of these elusive particles and their significance in the cosmos.”

The detector is near the ATLAS experiment, which is one of the Large Hadron Collider’s four primary detectors. It is housed in an older tunnel that was previously used to inject beams into the site’s earlier particle accelerators, and it is here that a strong and highly collimated neutron beam is transmitted. The team has learned two important lessons because of identifying these six neutrinos.

“First, it confirmed that the LHC’s position forward of the ATLAS interaction point is the correct place for detecting collider neutrinos,” Feng explained. “Second, we showed that employing an emulsion detector to see these types of neutrino interactions is effective.”

The prototype detector weighed just 29 kilograms (64 pounds), while the next one, known as FASERnu, will weigh in at about 1,100 kg (2,400 pounds). The team hopes to detect 10,000 neutrinos when it goes on in 2022. All three variants of the electron neutrino, muon neutrino, and tau neutrino, as well as their anti-matter counterparts, will be included.

“Now that the FASER team has confirmed the effectiveness of the emulsion detector approach for observing the interactions of neutrinos produced at a particle collider,” Feng said, “the FASER team is preparing a new series of experiments with a full instrument that is much larger and significantly more sensitive.”

The discovery of tau neutrinos, which only been observed around 10 times before, has piqued the team’s interest. Over the next three years, this instrument should add a few hundred more detections. It is also possible that FASERnu will detect something that is not yet understood in physics, such as a dark photon. We will have to wait and see what happens.