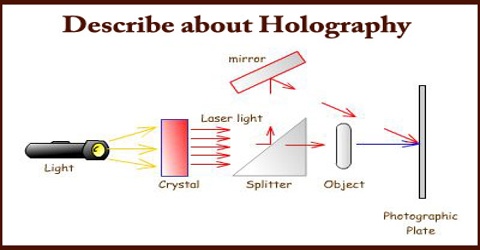 Holography (or Holograms) is a photographic technique that records the light scattered from an object, and then presents it in a way that appears three-dimensional. The holography itself is not an image and it is usually unintelligible when viewed under diffuse ambient light. It is an encoding of the light field as an interference pattern of seemingly random variations in the opacity, density, or surface profile of the photographic medium. When suitably lit, the interference pattern diffracts the light into a reproduction of the original light field and the objects that were in it appear to still be there, exhibiting visual depth cues such as parallax and perspective that change realistically with any change in the relative position of the observer. Holography is actually based on the principle of interference. A hologram captures the interference pattern between two or more beams of coherent light (i.e. laser light). One beam is shone directly on the recording medium and acts as a reference to the light scattered from the illuminated scene.

Holography should not be confused with lenticular and other earlier autostereoscopic 3D display technologies, which can produce superficially similar results but are based on conventional lens imaging. Stage illusions such as Pepper’s Ghost and other unusual, baffling, or seemingly magical images are also often incorrectly called holograms.

Various types of holograms have been made over the years, including transmission holograms, which allow light to be shined through them and the image to be viewed from the side; and rainbow holograms, which are used for security purposes — on credit cards and driver’s licenses, for example.

The development of hologram technology started in 1962, when Yuri Denisyuk, in the Soviet Union, and Emmett Leith and Juris Upatnieks at the University of Michigan developed laser technology that recorded 3D objects. Silver halide photographic emulsions were used for the recording medium, though the clarity of said objects wasn’t perfect at the time. But new methods involving the conversion of transmission with the refractive index allowed holograms to be improved over time. Hologram records information about light passing through a 2D region rather than light focused onto a 2D region (as in photographs).

A hologram captures a representation of the light passing through the imaging plate on its way to the viewer, the light doesn’t actually pass through during photography, but that is a detail. The hologram captures the light before it is focused, and thus contains information about the light from many points of view. The way this information is captured involves the magic of light wave interference patterns using lasers. The light wave interference pattern is recorded by the silver halide crystals. The physical medium of holographic film is photo-sensitive with a fine grain structure. Common materials used are silver-halide emulsions, dichromate gelatins and photopolymers – each having their own characteristics and require different processing. Holograms can also be embossed ‘stamped into a foil’ with applications including in security identification, such as on passports, credit cards, tickets and packaging, as they are difficult to copy without the master hologram.

The problem with a hologram is that the interference pattern on the imaging plate looks random and meaningless if viewed directly. The image must be decoded by using the same type of laser light that was used to create the image in the first place. The way decoding works is that the laser light passes though the 2D film, causing the light wave pattern that hit the plate during photography to be reconstructed. The viewer on the other side of the film is then able to view the scene as if the scene was still there. There are three important properties of a hologram which are defined in this section. A given hologram will have one or other of each of these three properties, e.g. an amplitude modulated thin transmission hologram, or a phase modulated, volume reflection hologram. For now, holograms are static, new holographic technology is being developed that projects 3D images from another location in real time. The images are also static, but they are refreshed every two seconds, creating a strobe-like effect of movement. The researchers hope to improve the technology over the next few years to bring higher resolution and faster image streaming.