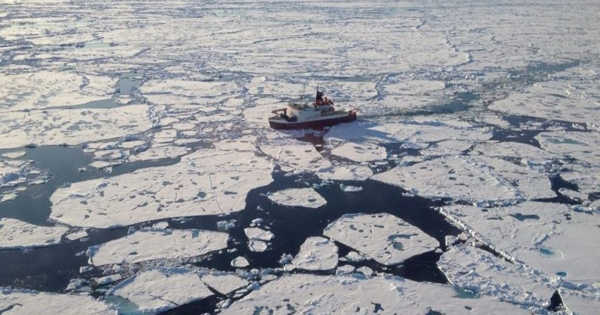 Researchers discovered a Large Quantity of Microplastics in Arctic Ecosystem

Plastic pollution is widely acknowledged as a threat to marine ecosystems, habitats, and wildlife worldwide, and it has now reached remote locations such as the Arctic Ocean. Nonetheless, the distribution of microplastics in the Eurasian Arctic is particularly poorly documented.

Microplastics, those ubiquitous modern-day relics, have infiltrated seemingly every part of the planet today, including rain over the Rocky Mountains and the farthest reaches of the Arctic. Scientists have been perplexed as to how this flood of pollution makes its way to such remote locations far from the urban areas where it is generated. A new study reveals that the tiny particles are carried aloft and fall as snow in the Arctic.

Rhodoliths made of coralline red algae provide ecological niches for a wide range of organisms around the Svalbard archipelago in the Arctic Ocean. A group of scientists recently discovered a large number of microplastics in this ecosystem.

Rhodoliths made of coralline red algae provide ecological niches for a wide range of organisms around the Svalbard archipelago in the Arctic Ocean. A group of researchers from Friedrich-Alexander-Universität Erlangen-Nürnberg (FAU), the University of Bayreuth, and the Senckenberg Research Institute in Wilhelmshaven discovered a large number of microplastics in this ecosystem.

Around the Svalbard archipelago in the Arctic Ocean, rhodoliths made up of coralline red algae provide ecological niches for a wide variety of organisms. A team of researchers has recently discovered a large number of microplastics in this ecosystem.

The diversity of organisms found in the Arctic Ocean is frequently understated. Marine life in some areas is even more diverse than that found on coral reefs. Rhodoliths, which are nodules composed of coralline red algae and are slightly larger than a fist, is one reason for this diversity. There are numerous ecological niches on and between these rhodoliths, and the rhodoliths of Svalbard are unique in that they are hollow.

This is due to the fact that a specific type of mollusc bores cavities into the calcareous skeletons of rhodoliths in order to hide from predators. “At some point, the molluscs die off, and the hollow nodule, with its hard calcareous shell, provides a perfect hiding place for other organisms,” explains Dr. Sebastian Teichert of FAU’s Chair of Palaeoenvironmental Research. “We can refer to rhodoliths and mollusks as ‘ecosystem engineers,’ because they create habitat for other organisms.”

Microplastics found in every single mollusc

Using spectroscopy, the researchers examined molluscs from various rhodoliths and discovered microplastics in every mollusc they examined. “Because mollusks filter water when feeding, and because a large portion of the Arctic is already contaminated with microplastics, we expected to find microplastic particles, but not in this quantity and variety,” says Ines Pyko of FAU’s Professorship for Palaeontology. “We discovered up to 184 particles made up of eight different types of plastic in some mollusks.”

The effects of microplastics on the environment are still unknown. Microplastics have already been shown in laboratory studies to cause inflammation in mollusk tissue. If the molluscs are unable to perform their function as ecosystem engineers as a result of this contamination, it will have ramifications for all organisms protected by the hollow rhodoliths. This, in addition to climate change, poses a new threat to the Arctic’s diverse ecosystem.

Some of the world’s largest loads of plastics are found in the Arctic, hundreds of miles from the nearest major city. Microplastic concentrations in sea ice are found to be higher in these remote, high-latitude hotspots than in the five infamous ocean garbage patches, according to studies. A recent study discovered that airborne microplastics, mixed with snow, are falling on the far north.

Hallanger, an ecotoxicologist, is curious about how the influx of synthetic materials will affect life in the ice-edge habitats that serve as the foundation of the ocean food web. “If it is true that the ice contains so many plastics,” she says, “then organisms living in and beneath the ice may have some of the most contaminated living spaces in the ocean.”