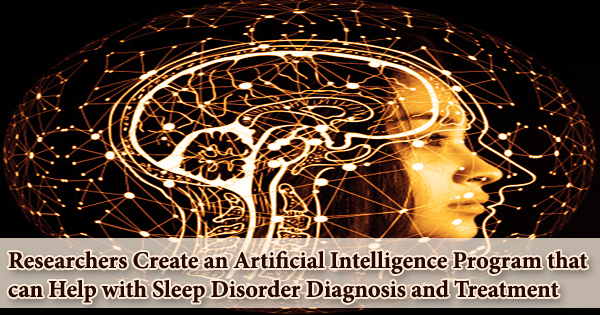 Thousands of Danes suffer from a variety of sleep problems, including insomnia, sleep apnea, and narcolepsy. Furthermore, it is believed that up to 200,000 Danes have undiagnosed sleep apnea.

Researchers from the Department of Computer Science at the University of Copenhagen collaborated with the Danish Center for Sleep Medicine at the Danish hospital Rigshospitalet to develop an artificial intelligence algorithm that can improve diagnoses, treatments, and our overall understanding of sleep disorders in a new study.

Mathias Perslev, a Ph.D. student at the Department of Computer Science and the main author of the study, just published in the journal npj Digital Medicine, says, “The algorithm is extraordinarily precise. We completed various tests in which its performance rivaled that of the best doctors in the field, worldwide.”

Sleep disorders are a collection of illnesses that impair one’s capacity to get enough sleep on a regular basis. Most people have trouble sleeping from time to time owing to stress, hectic schedules, and other external factors. These difficulties, on the other hand, may suggest a sleeping disorder if they occur on a regular basis and interfere with everyday living. Sleep is critical; not getting enough sleep may negatively impact school and job performance, interpersonal relationships, health, and safety.

Adults should sleep for at least seven to nine hours every night, according to experts, while some people require more and some require less. In older individuals, sleep is frequently disrupted by the urge to use the toilet and physical pain or discomfort. In children, there has been a decreasing trend in sleep time; optimum sleep time varies by age.

Can support doctors in their treatments

Admission to a sleep clinic is usually the first step in a sleep problem assessment today. Various measurement equipment are used to track a person’s night sleep. The 7-8 hours of readings from the patient’s nighttime sleep are then reviewed by a sleep problem specialist.

The doctor manually separates these 7-8 hours of sleep into 30-second periods, which must all be classified as REM (rapid eye movement) sleep, light sleep, deep sleep, and so on. It’s a time-consuming task that the algorithm can complete in a matter of seconds.

“This project has allowed us to prove that these measurements can be very safely made using machine learning which has great significance. By saving many hours of work, many more patients can be assessed and diagnosed effectively,” says Poul Jennum, professor of neurophysiology and head of the Danish Center for Sleep Medicine.

More than 4,000 polysomnography examinations, also known as PSG or sleep studies, are performed annually on patients with sleep apnea and other more severe sleeping problems in Denmark’s Capital Region alone. A doctor’s analysis of a PSG examination takes 1.5-3 hours. By using the new methodology, between 6,000 and 12,000 medical hours may be freed up in Denmark’s Capital Region alone.

The algorithm functions across sleep clinics and patient groups

The researchers behind the program were able to assure optimal performance by collecting data from a number of sources. Across all, 20,000 nights of sleep were gathered and utilized to train the algorithm in the United States and a number of European nations. Treatment for sleep problems varies according to the nature and underlying cause of the problem. However, it usually entails a mix of medical interventions and lifestyle modifications.

“We have collected sleep data from across continents, sleep clinics, and patient groups. The fact that the algorithm works well under such diverse conditions is a breakthrough,” explains Mathias Perslev and Christian Igel, who led the project on the computer science side, adding:

“Achieving this kind of generalization is one of the greatest challenges in medical data analysis.”

They believe that, in the future, the algorithm will aid physicians and researchers all across the world in learning more about sleep problems. The sleep analysis program is free to use and can be found at sleep.ai.ku.dk. It may be used by anybody, anywhere, even if there isn’t a sleep clinic nearby.

“Just a few measurements taken by common clinical instruments are required for this algorithm. So, use of this software could be particularly relevant in developing countries where one may not have access to the latest equipment or an expert,” says Mathias Perslev.

The researchers are currently collaborating with Danish doctors to get the software and algorithm authorized for clinical usage.

Benefits of Gene Therapy for Cancer

How to Prevent Blistered Feet