Pinshane Huang’s research team at the University of Illinois at Urbana-Champaign is advancing imaging techniques to visualize small molecule structures clearly a task that was previously believed to be unachievable. Their finding opens up the limitless potential for enhancing common uses, including polymers and medications.

In order to demonstrate the methodology that enables researchers to visualize small molecular structures and accelerate current imaging techniques, the Department of Materials Science and Engineering associate professor collaborated with co-lead author Blanka Janicek, a ’21 alumna and post-doc at Lawrence Berkeley National Laboratory in Berkeley, Calif., and Priti Kharel, a graduate student in the Department of Chemistry.

Through their work, the team has revealed the atomic structure of the molecule, which has helped researchers better comprehend how it responds, understand its chemical processes, and learn how to create its chemical compounds.

“The structure of a molecule is so fundamental to its function,” Huang said. “What we’ve done in our work is make it possible to see that structure directly.”

It is essential to be able to see the structure of tiny molecules. Kharel uses the drug thalidomide as an example to illustrate how important it is.

When thalidomide was first discovered in the 1960s, it was given to expectant mothers to relieve morning sickness but it was later discovered that it might lead to serious birth deformities or, in rare cases, even death.

The medication contained two different molecular structures, one of which was in charge of curing morning sickness while the other, regrettably, had disastrous negative consequences on the fetus.

Month after month, week after week, our resolution improved. And then one day, my students came in and showed me the individual carbon atoms that’s a major achievement. And of course, it comes after all this deep knowledge that they have gained to design an imaging experiment and how to unlock data from what looks like nothing.

Huang and her students were inspired to continue this investigation after realizing the necessity for proactive, not reactive science.

“It’s so crucial to accurately determine structures of these molecules,” Kharel said.

Even worse, erroneous structures created by indirect techniques might impair scientists’ understanding of the structure of molecules for years. Direct imaging techniques may be used to resolve the structural uncertainty of tiny molecules.

Huang has witnessed substantial improvements in cryogenic electron microscopy equipment during the past ten years, which allows scientists to freeze huge molecules and obtain high-resolution photographs of their structures.

“The question that I had was: What’s keeping them from doing that same thing for small molecules?” Huang said. “If we could do that, you might be able to solve the structure (and) figure out how to synthesize a natural compound that a plant or animal makes. This could turn out to be really important, like a great disease-fighter,” Huang said.

Detecting the structures of small molecules can be challenging because they are frequently 100–1,000 times smaller than large molecules.

Small molecules’ imaging signals are easily masked by their surroundings, unlike those from large molecules. The researchers came up with an alternative method to shield the small molecules’ structures from the harsh environment of the electron microscope instead of employing ice, which is traditionally used as a barrier.

How can you temper a molecule’s environment? By using graphene.

The surroundings of the little molecule needed stabilizing, but that was only one problem the Illinois researchers had to solve. To illuminate the molecules, the scientists had to employ a fraction of the usual amount of electrons as little as one millionth instead.

Low electron dosages guarantee that the molecules are still moving sufficiently for the researchers to take a picture.

“The way I like to think about it is the molecule doesn’t like to be bombarded by higher-energy elections, but we need to do that to be able to see the structure, and graphene helps dissipate some of that charge away from the molecule so that we can actually get a nice image of it,” Janicek said.

Unfortunately, once captured, the molecules were nearly invisible in the image.

“When they take a low-dose image, it initially looks like noise or TV static almost like nothing is there,” Huang said.

The idea was to use a Fourier transform, a mathematical operation that dissects a small molecule’s picture to determine its spatial frequency, to separate the atomic structures from that noise.

“We took images of hundreds of thousands of molecules and added them together to build a single, clear image,” Kharel said.

The team’s use of averages allowed them to produce clear pictures of the molecules’ atoms without compromising the integrity of any particular molecule.

“Month after month, week after week, our resolution improved,” Huang said. “And then one day, my students came in and showed me the individual carbon atoms that’s a major achievement. And of course, it comes after all this deep knowledge that they have gained to design an imaging experiment and how to unlock data from what looks like nothing.”

“There’s been this whole field of small molecules that have been left out in the cold, so to speak. We’re shining a light on how do we get there as a field? How do we make this thing that for us right now is so hard?” Huang said. “One day it won’t be that’s the hope.”

The Illinois researchers’ efforts are the first big step in turning that dream into reality.

“One day, this will be the way we solve the structure of a small molecule,” Huang said. “People will simply throw the molecule in the electron microscope, take a picture, and be done.”

That dream inspires Huang and her Illinois team to keep the course.

“That’s potentially life-changing, and we’ve made it exist,” Huang said. “We haven’t yet made it easy, but imaging techniques like this will change so much of science and technology.” Freshwater Ice can form Scallops and Spikes when Melted 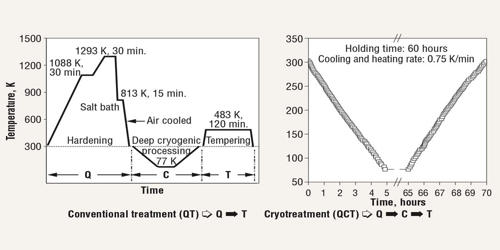 Quantum Storage can be Obtained by Connecting Atoms