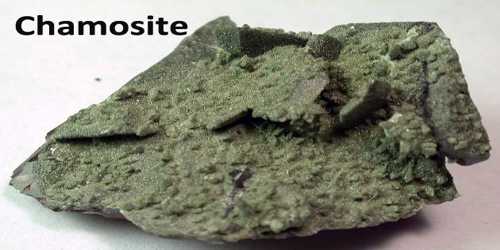 Chamosite is a monoclinic-prismatic mineral containing aluminum, hydrogen, iron, magnesium, oxygen, and silicon. It is a member of the Chlorite, and it forms a series with the mineral Clinochlore. Chamosite is the iron rich end member, and Clinochlore is the magnesium-rich end member. Their properties are very similar, and they are difficult to distinguish from each other, though Chamosite is harder, heavier, and usually less transparent than Clinochlore. 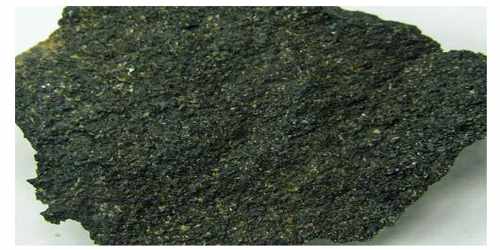 Chamosite is named after the municipality of Chamoson, between Sion and Martigny, the canton of Valais, Switzerland. In 1820, Pierre Bertier; a mineralogist and mining engineer from Nemours, France, discovered chamosite.

Chamosite is a product of the hydrothermal alteration of pyroxenes, amphiboles and biotite in igneous rock. The composition of chlorite is often related to that of the original igneous mineral so that more Fe-rich chlorites are commonly found as replacements of the Fe-rich ferromagnesian minerals.

Occurrence and Structure of Chamosite

The new mineral was found in an area of low to moderate grade metamorphosed iron deposit. Chamosite is a relatively uncommon mineral in nature. Early chamosite stirred some controversy after they discovered to have possessed the structure of kaolin rather than chlorite. The occurrence of the hydrous ferrous silicate, chamosite, in sedimentary ironstones was described by Hallimond1. Later, with Harvey and Bannister2, he concluded that chamosite differed from the iron-bearing chlorites. Brindley3,4 examined chamosites from laterites and other sources, and concluded that they were of kaolin-type. Many of the variations in X-ray diagrams were accounted for by the existence of two kaolin-type structures, one ortho-hexagonal and one monoclinic, with simply related cell dimensions. In common with some other clay minerals, chamosite had random displacements of layers parallel to the b-axis of integral multiples of b/3, giving rise to sharp (hkl) reflexions only for k = 3n. 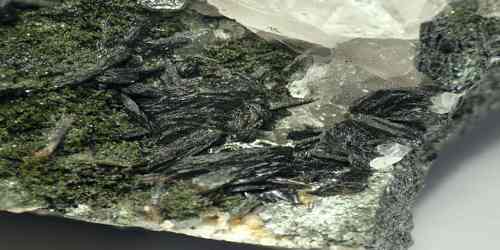 The chamosite structure is very similar to typical chlorite in which they are alternated regular layers with tetrahedral and tri-octahedral components. Its 2:1 layer structure is similar to that of mica, with a basal spacing of 14 Å. In most common chlorites, there are 12.0 octahedral cations per O20(OH)16 and approximately equivalent amounts of aluminium in tetrahedral and octahedral sites; e.g. the magnesia chlorite, clinochlore, (Mg10Al2)(Si6Al2O20)(OH)16.

Formation of chamosite bearing oolites record periods of increasing wave energy corresponding to storm conditions between quiet shallow marine sedimentation. Chamosite is a mineral from which elements may be extracted for commercial purpose. Xuanwei City in Yunnan Province has one of the highest lung cancer mortality rates in China. This epidemic had long been blamed on hydrocarbons released from the burning of coal conducted a mineralogical and geochemical study of coal from two coal mines in this region, and identified chamosite as one of the main minerals in the coal. 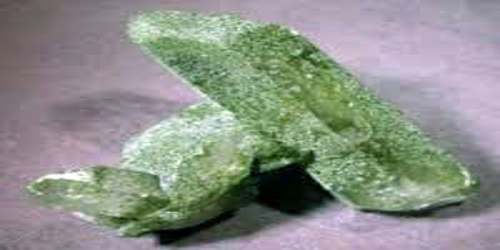 Properties and Uses of Chamosite

Chamosite may be greenish gray or brown in color. The cleavage are length-slow, the orientation may be α ∧ c=small, β=b, γ ∧ α=small, optic plane= [0 10] and has good cleavage on the {011} axis. It has a dull luster and grayish-green streak. Birefringence is much lower than that of the micas, illites, montmorillonites and vermiculite, and refractive indices are higher than those of kaolinite. The chamosite spectra shows the reflection d=7.18 Å (main value of the chlorite) and the reflection d=14.4 Å. It has a laminar shape, sheets measure from 20 to 200 μm.

Iron likewise combines with a considerable variety of substances other than oxygen; and some of these compounds, as for instance iron carbonate (siderite), iron silicate (chamosite, glauconite, etc.), and iron sulphide (pyrite), are locally mined as iron ores.