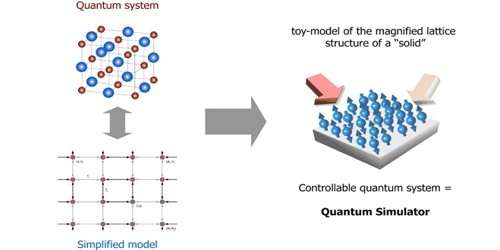 Quantum simulators permit the study of quantum systems that are difficult to study in the laboratory and impossible to model with a supercomputer. They are controllable quantum systems that can be used to simulate other quantum systems. They are devices that actively use quantum eﬀects to answer questions about model systems and, through them, real systems. In this instance, simulators are special-purpose devices designed to provide insight into specific physics problems. Simulating models of the physical world is instrumental in advancing scientiﬁc knowledge and developing technologies. Quantum simulators may be contrasted with generally programmable “digital” quantum computers, which would be capable of solving a wider class of quantum problems. Powerful classical simulation methods are able to predict the properties of quantum many-body systems in many relevant regimes.

A universal quantum simulator is a quantum computer proposed by Yuri Manin in 1980 and Richard Feynman in 1982. David Deutsch in 1985, took the ideas further and described a universal quantum computer.  But much progress has been made since 1981 when Feynman delivered his seminal lecture ‘Simulating Physics with Computers’. In 1996, Seth Lloyd showed that a standard quantum computer can be programmed to simulate any local quantum system efficiently. These quantum simulators, as they are called today, promise to largely overcome this bottleneck, due to the highly beneficial scaling of resources.

Quantum simulators have been realized on a number of experimental platforms, including systems of ultracold quantum gases, polar molecules, trapped ions, photonic systems, quantum dots, and superconducting circuits. The research field of quantum simulation is in its infancy and many divergent approaches are being proposed, studied and tested.