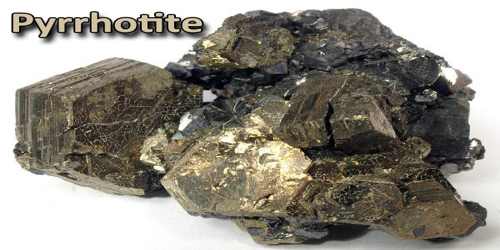 Pyrrhotite is a common bronze-coloured magnetic mineral consisting of ferrous sulphide in hexagonal crystalline form. It is also called magnetic pyrite, because the color is similar to pyrite and it is weakly magnetic. The magnetism decreases as the iron content increases, and troilite is non-magnetic. It commonly is found with pentlandite and other sulfides in silica-poor igneous rocks, as at Kongsberg, Nor.; Andreas-Berg, Ger.; Trentino, Italy; and Sudbury, Ont. The variety troilite, with a composition near that of iron sulfide (FeS), is an important constituent of some meteorites. 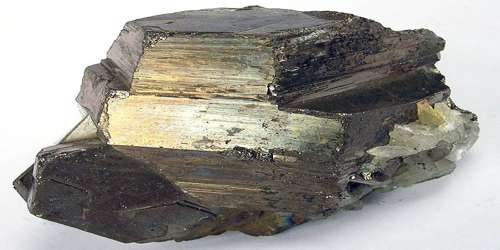 Pyrrhotite is named from the Greek word pyrrhos, which means “color of fire”. This is despite the fact that the usual color of Pyrrhotite is a bronze color rather than red; however its tarnish may have hints of sparkling red.

Occurrences, Structure and Properties of Pyrrhotite

Pyrrhotite is commonly pseudomorphed by Pyrite, with complete replacement of the Pyrhottite by sparkling Pyrite crystals. It occurs as segregation deposits in layered intrusions associated with pentlandite, chalcopyrite and other sulfides. It is an important constituent of the Sudbury intrusion where it occurs in masses associated with copper and nickel mineralisation. It also occurs in pegmatites and in contact metamorphic zones. Several localities worldwide have produced outstanding examples of Pyrrhottite in attractive crystals and aggregates. Well crystallized and lustrous platelets are well known from Dal’negorsk, Primorskiy Kray, Russia; and highly lustrous, intergrown crystals clusters have been recently coming from the Yaogangxian Mine, Hunan Province, China. Etched crystals are classics at the Herja Mine, Chiuzbaia (Kisbánya), Baia Mare, Maramureș Co., Romania; and well-formed flattened crystals and rosettes have come from Trepča, Kosovo. 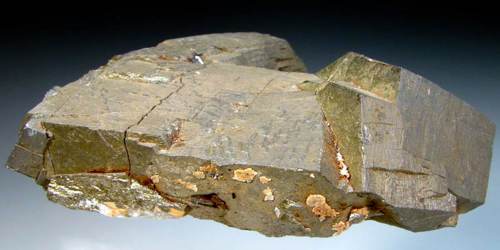 In Brazil, flattened bronze Pyrrhottite crystals have come from the Morro Velho mine, Nova Lima, Minas Gerais. Thick, prismatic crystals, representing some of the best forms of this mineral, are classics at the Potosí Mine, Santa Eulalia District, Chihuahua, Mexico.

One of such structures is pyrrhotite-4C (Fe7S8). Here “4” indicates that iron vacancies define a superlattice that is 4 times larger than the unit cell in the “C” direction. The C direction is conventionally chosen parallel to the main symmetry axis of the crystal; this direction usually corresponds to the largest lattice spacing. Other polytypes include: pyrrhotite-5C (Fe9S10), 6C (Fe11S12), 7C (Fe9S10) and 11C (Fe10S11).

Pyrrhotite forms in several crystal polytypes with possible symmetry in more than one crystal group. Crystals are usually pseudohexagonal in shape, and they may be flat or wider midsections. A well-known habit is as stacked prismatic barrel-shaped crystals. Also tabular, in platy aggregates, bladed, in hexagonal rosettes, and in groups of integrown tabular hexagons and barrels. Commonly grainy or massive. Crystals are usually horizontally striated, and frequently have cracks in them. 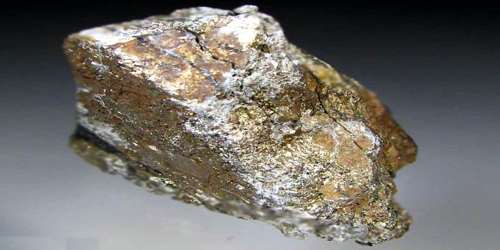 Pyrrhotite does not have specific applications. It is mined primarily because it is associated with pentlandite, sulfide mineral that can contain significant amounts of nickel and cobalt. It is an ore of iron. Well crystallized Pyrrhotite specimens are important collector’s minerals. The aesthetic prismatic crystal forms are especially treasured by collectors and in high demand.