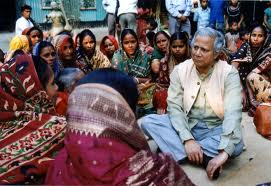 Profitable and sustainable financial intermediation is possible with the poor, who are otherwise excluded from the formal credit system because of lack of collateral, and poverty reduction is possible through targeted credit. This is the key finding of an ongoing study of the Grameen Bank conducted jointly by the World Bank and the Bangladesh Institute of Development Studies. This study uses aggregate and branch- level data of Grameen Bank for 1985 through 1993 to determine how the Bank operates, at what cost, and whether its program is sustainable and replicable. The study uses village-level data to examine macro-level effects, such as the Bank’s impact on rural wages. The study also uses household survey data to examine household and intrahousehold impacts on income, employment, asset accumulation, nutrition, health, and education. Some of the findings of this study are reported below.

Grameen Bank believes that lack of access to credit is the biggest constraint for the rural poor. If the poor are provided credit on reasonable terms, they themselves best know how to increase their incomes. Grameen Bank targets and mobilizes the poor and creates social and financial conditions so that they receive credit by identifying a source of self-employment in familiar rural non-farm activities. The Bank’s method of targeting the poor is effective as it mobilizes only those who are willing to bear the costs of group formation, training, and monitoring each other’s activities, and those who are satisfied with the relatively small sums they can borrow and repay. To better meet its ultimate goal of social and economic development, Grameen Bank targets women more than men. By doing so, it directly channels credit to the poorest and the least empowered and helps improve the living standards of their families. Along with providing credit, Grameen Bank offers guidelines to members for codes of conduct and activities aimed at improving their social and financial conditions. It also provides training to women in maternal health, nutrition, and childcare to generate greater demand for basic health care services.

Lending entails high risk of loan default due to adverse selection of borrowers and disability of lenders to enforce the loan contracts. Contrary to the practice of formal finance, Grameen Bank lends (in small amounts) to the poor based on group responsibility where individual access to credit depends on group repayment behavior. Group lending uses peer pressure to monitor and enforce contracts and helps screen good borrowers from bad ones. Unlike other development banks, Grameen Bank mobilizes savings as an integral part of lending. Each member is required to save Taka 1 each week and buy a Grameen Bank share worth Taka 100. In addition, each borrower contributes 5 percent of the loan amount to a group fund and Taka 5 for every 1,000 Takas above loan size greater than Taka 1,000 to an emergency fund. These savings mobilization schemes provide protection of loans against default, an internal source of finance, and a stake for the members in Bank operations.

Grameen’s Success as a Bank in Reaching the Poor:

In 1993, with 1,039 branches covering almost half of Bangladesh’s villages, the Bank served more than 1.8 million borrowers and disbursed $169 million. By 1993, cumulative member savings totaled over $218 million. Almost 94 percent of the Bank’s members are poor women, accounting for nearly 70 percent of savings mobilized, and receiving over 80 percent of the total loans disbursed. Its loan recovery rate has been consistently over 90 percent compared with rates from 25 to 50 percent for other financial institutions in Bangladesh. Contrary to common belief, Grameen’s experience is that women are better credit risks with higher loan recovery rates than men (97 percent compared to 89 percent in 1992), and that the dropout rate is lower for women (15 percent) than for men (25 percent). The Grameen model is being replicated in more than 30 countries and the World Bank has provided a grant of $2 million for its replication in low-income countries.

The leadership of Professor Muhammad Yunus has been the guiding force for Grameen’s inception and expansion. But, over time, Grameen Bank has institutionalized a decentralized management structure with a cadre of dedicated professionals that is operating without much of his involvement. Moreover, subsidized funds and grants have been instrumental for its institutional development. However, through increased membership and lending, the Bank has reduced its subsidy dependency from 23 percent of subsidy per Taka lending in 1987 to 12 percent in 1993. Nearly 55 percent of its 1,039 branches are now operating with profits. It takes about five years of operation for a branch to realize a profit.

Since economies of scale exist in branch operation, Grameen Bank has the potential to eliminate subsidies through expanding its membership and lending. But its expansion depends on the entrepreneurial ability of borrowers and market opportunities. The high loan recovery rate, the low dropout rate and the finding of a positive village-level wage effect suggest that the benefits from program participation are high and sustainable. But its continued support of traditional non-farm activities may not prove self- sustaining as Grameen Bank expands. The Bank must be able to expand lending in more growth-oriented activities for its survival in the long run.

The group-based lending is replicable in other countries where the market failure requires credit to be targeted but the existing financial institutions cannot be used to deliver credit. The model is also desirable if financial intermediation requires social mobilization such as organization, and imperfect information and imperfect enforcement make lending highly risky and costly. In order to successfully replicate group- based lending for poverty alleviation, the poor may need organizational help and other inputs to improve their income and productivity. But providing such inputs are costly for an organization which may also need experimentation to determine the modus operandi of an appropriate delivery mechanism. However, the poor are not likely to be capable of bearing the full costs associated with program adaptation and implementation. Thus, successful replication depends on the availability of subsidized funds at the initial stage and above all, on the creativity and commitment of the leadership.