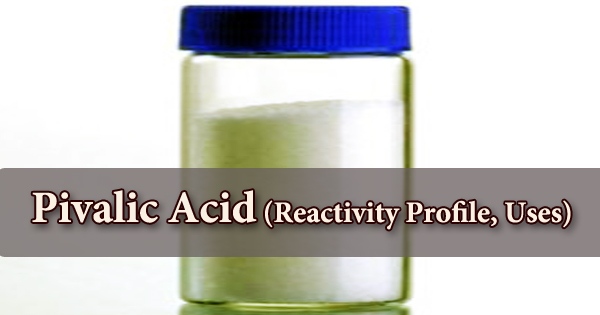 Pivalic acid is a low-toxicity-colored crystalline solid that dissolves in water, ethyl alcohol, and diethyl ether. It is a carboxylic acid with a molecular formula of (CH3)3CCO2H. It’s a short-chain branching fatty acid made up of propanoic acid with two methyl substituents at the 2-position. It’s a saturated fatty acid with a branched chainPivalic acid, a methyl-branched fatty acid, and a short chain. It’s a pivalate’s conjugate acid.

The pivalyl or pivaloyl group (t-BuC(O)) is abbreviated as Piv, and pivalic acid (t-BuC(O)OH) is abbreviated as PivOH. If a base is present to take hydrogen ions, carboxylic acids donate them. They react in this way with all bases, both organic and inorganic (for example, amines). Their reactions with bases, known as “neutralizations,” result in the release of large amounts of heat. Pivalic acid is prepared by hydrocarboxylation of isobutene via the Koch reaction:

When an acid and a base are neutralized, water and salt are produced. Carboxylic acids with six or fewer carbon atoms are water-soluble freely or moderately; those with more than six carbon atoms are water-soluble just marginally. An acid catalyst, such as hydrogen fluoride, is required for such reactions. Isobutene can also be replaced by tert-butyl alcohol or isobutyl alcohol. Several million kilograms are generated annually over the world. In water, soluble carboxylic acids break down to produce hydrogen ions to some amount. As a result, the pH of carboxylic acid solutions is less than 7.0.

The oxidation of pinacolone with chromic acid and the hydrolysis of tert-butyl cyanide were used to make pivalic acid. The Grignard reagent is carbonated and pinacolone is oxidized in a convenient laboratory process that uses tert-butyl chloride. Sulfites, nitrites, thiosulfates (to yield H2S and SO3), and dithionites (SO2) react with carboxylic acids in aqueous solution to produce flammable and/or poisonous fumes and heat. When they react with carbonates and bicarbonates, they produce a harmless gas (carbon dioxide), but they also produce heat.

At a temperature below 100 °C and elevated carbon monoxide pressure, isobutylene or diisobutylene is combined with carbon monoxide and water. Carboxylic acids, like other organic molecules, can be oxidized and reduced by powerful oxidizing and reducing agents. These reactions produce heat, and a large range of compounds can result. Carboxylic acids, like other acids, can initiate polymerization events, and they frequently catalyze (speed up) chemical reactions. Highly reflective lacquers are made from polymers obtained from pivalate esters of vinyl alcohol. In chemical synthesis, the pivaloyl (abbreviated Piv or Pv) group acts as a protection group for alcohols.

For NMR spectra of aqueous solutions, pivalic acid is sometimes employed as an internal chemical shift standard. While DSS is more usually employed for this, the tiny peaks from protons on DSS’s three methylene bridges can be problematic. It’s a pivaloyl-containing metabolite of oral cephem (β-lactam) antibiotics like S-1108. In chemical synthesis, the pivaloyl group is also utilized as a protective group. Treatment of alcohol with pivaloyl chloride (PvCl) in the presence of pyridine is a common method of protection.