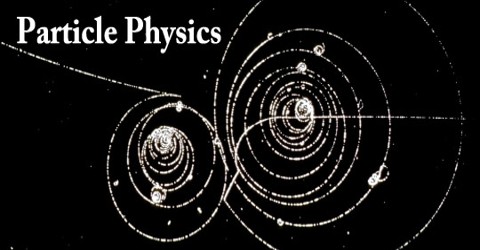 Particle Physics is a search for the most primitive, primordial, unchanging and indestructible forms of matter and the rules by which they combine to compose all the things of the physical world. It deals with matter, energy, space, and time. The objectives of particle physics are to identify the most simple objects out of which all matter are composed and to understand the forces which cause them to interact and combine to make more complex things.

It is also called “high energy physics”, because many elementary particles do not occur under normal circumstances in nature, but can be created and detected during energetic collisions of other particles, as is done in particle accelerators. Modern particle physics research is focused on subatomic particles, which have less structure than atoms. These include atomic constituents such as electrons, protons, and neutrons (protons and neutrons are actually composite particles, made up of quarks), particles produced by radiative and scattering processes, such as photons, neutrinos, and muons, as well as a wide range of exotic particles.

Particle physicists use basic terms and concepts when describing their research. Some of those terms and concepts are summarized in other topics in the section and in the Glossary, not necessarily to be taught to students, but to provide a background for the teacher for questions that may arise.

In the 19th century, John Dalton, through his work on stoichiometry, concluded that each element of nature was composed of a single, unique type of particle. The early 20th century explorations of nuclear physics and quantum physics led to proofs of nuclear fission in 1939 by Lise Meitner, which was based on experiments by Otto Hahn, and nuclear fusion by Hans Bethe in that same year; both discoveries also led to the development of nuclear weapons. Throughout the 1950s and 1960s, a bewildering variety of particles were found in collisions of particles from increasingly high-energy beams. It was referred to informally as the “particle zoo”. The standard model is the name given in the 1970s to a theory of fundamental particles and how they interact. It incorporated all that was known about subatomic particles at the time and predicted the existence of additional particles as well.

There are seventeen named particles in the standard model, organized into the chart shown below. The last particles discovered were the W and Z bosons in 1983, the top quark in 1995, the tau neutrino in 2000, and the Higgs boson in 2012. Subatomic particle, also called elementary particle, any of various self-contained units of matter or energy that are the fundamental constituents of all matter. Modern particle physics research is focused on subatomic particles, including atomic constituents such as electrons, protons, and neutrons, protons and neutrons are composite particles called baryons, made of quarks, produced by radioactive and scattering processes, such as photons, neutrinos, and muons, as well as a wide range of exotic particles. An atom is one of the smallest particles in nature. Matter is made up of atoms. Atoms have three basic parts: neutrons, electrons and protons. The neutrons and protons are found in the center of the atom. The electrons circle around the protons and neutrons in a cloud, as shown in this figure. The particles represented in the figures are not shown in their correct proportions because the electrons would be too small to see.

A proton is a subatomic particle with a positive electric charge. All protons are identical. The mass of a proton is approximately 1.6726 * 10^-24 g. Because the masses of particles in atoms are so small, scientists developed a new unit for them. All protons are identical, no matter from which kind of element they come. All the atoms of one element have the same number of protons.