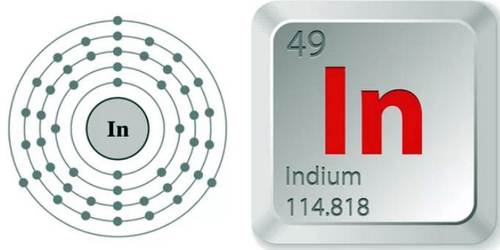 Indium is a soft, malleable, silvery-white metallic element that occurs mainly in ores of zinc and lead. Its atomic number 49; atomic weight 114.82; melting point 156.61°C; boiling point 2,080°C; specific gravity 7.31; valence 1, 2, 3. Very soft and malleable, indium has a melting point higher than sodium and gallium, but lower than lithium and tin. Chemically, indium is similar to gallium and thallium, and it is largely intermediate between the two in terms of its properties. 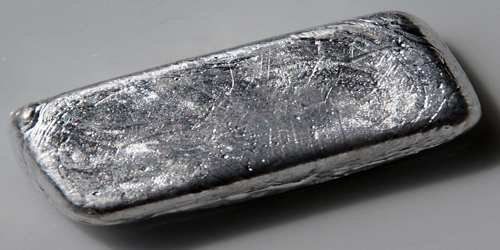 It is used in the manufacture of semiconductors, in bearings for aircraft engines, and as plating over silver in mirrors. Indium has no biological role, though its compounds are somewhat toxic when injected into the bloodstream. Most occupational exposure is through ingestion, from which indium compounds are not absorbed well, and inhalation, from which they are moderately absorbed.

Indium was discovered in 1863 by Ferdinand Reich at the Freiberg School of Mines in Germany. Reich was investigating a sample of the mineral zinc blende (now known as sphalerite, ZnS) which he believed might contain the recently discovered element thallium. From it he obtained a yellow precipitate which he thought was thallium sulfide, but his atomic spectroscope showed lines that were not those of thallium. However, because he was colour-blind he asked Hieronymous Richter to look at the spectrum, and he noted a brilliant violet line, and this eventually gave rise to the name indium, from the Latin word indicum meaning violet. 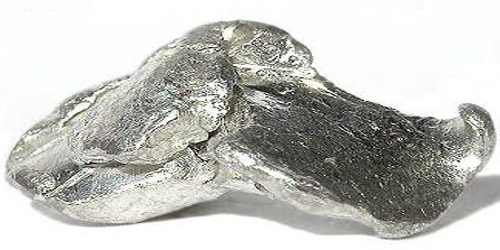 Occurreces and Properties of Indium

Indium was discovered by Ferdinand Reich and Theodor Richter in Germany in 1863. Richter isolated the metal in 1867. Its elements can be classified based on their physical states (States of Matter) e.g. gas, solid or liquid. This element is a solid. Indium is classified in the ‘Other Metals’ section which can be located in groups 13, 14, and 15 of the Periodic Table. All of these elements are solid, have a relatively high density and are opaque. Nearly 75% of all the elements in the Periodic Table are classified as metals which are detailed in the List of Metals.

Indium is the 68th most abundant element in Earth’s crust at approximately 50 ppb. This is similar to the crustal abundance of silver, bismuth and mercury. It very rarely forms its own minerals, or occurs in elemental form. Fewer than 10 indium minerals such as roquesite (CuInS2) are known, and none occur at sufficient concentrations for economic extraction. 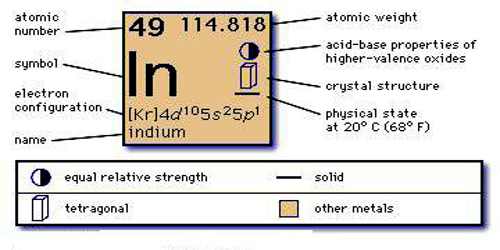 Indium is a soft silvery-white metal. It is one of the post-transition metals, which tend to be softer and conduct more poorly than the transition metals. It’s one of the softest metals known. Its main spectral lines are a bright indigo blue. The metal has a very low melting and boiling point making it ideal for soldering because it remains workable at low temperatures. One of indium’s most unusual properties is that it has a “tin cry” or a sound that resembles a scream when it’s bent.

Indium (I) compounds are not common. The chloride, bromide, and iodide are deeply colored, unlike the parent trihalides from which they are prepared. The fluoride is known only as an unstable gaseous compound. Indium (I) oxide black powder is produced when indium (III) oxide decomposes upon heating to 700 °C.

Most indium is used to make indium tin oxide (ITO), which is an important part of touch screens, flatscreen TVs and solar panels. This is because it conducts electricity, bonds strongly to glass and is transparent.

Indium nitride, phosphide and antimonide are semiconductors used in transistors and microchips.Indium metal sticks to glass and can be used to give a mirror finish to windows of tall buildings, and as a protective film on welders’ goggles. It has also been used to coat ball bearings in Formula 1 racing cars because of its low friction. 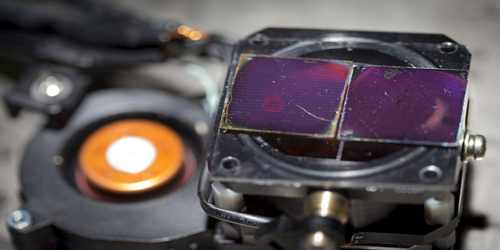 Indium’s high neutron-capture cross-section for thermal neutrons makes it suitable for use in control rods for nuclear reactors, typically in an alloy of 80% silver, 15% indium, and 5% cadmium. In nuclear engineering, the (n,n’) reactions of 113In and 115In are used to determine magnitudes of neutron fluxes.

An indium alloy has been used for fire-sprinkler systems in shops and warehouses because of its low melting point.