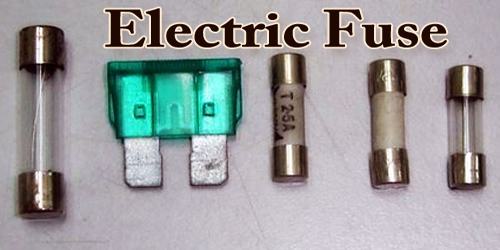 In electronics engineering, ‘Electric Fuse’ is a safety device that protects us from fire. It’s essential component is a metal wire or strip that melts when too much current flows through it, thereby stopping or interrupting the current. It is a sacrificial device; once a fuse has operated it is an open circuit, it must be replaced or rewired, depending on type. The property of fuse wire is that it has very low melting point. It is made up of an alloy consisting of lead and tin.

A fuse commonly consists of a current-conducting strip or wire of easily fusible metal that melts, and thus interrupts the circuit of which it is a part, whenever that circuit is made to carry a current larger than that for which it is intended. The screw-plug fuse was once commonly used in domestic electrical systems. It contains a short bit of wire (the fusible element) enclosed in a fireproof container that has a screw-threaded base; the wire is connected to metal terminals at both the screw base and at the side, and the whole is covered with a transparent glass or mica window for seeing whether the fuse has melted. The cartridge fuse, a type of fuse widely used in industry where high currents are involved, has a fusible element connected between metal terminals at either end of a cylindrical insulating tube.

Breguet recommended the use of reduced-section conductors to protect telegraph stations from lightning strikes; by melting, the smaller wires would protect apparatus and wiring inside the building. A variety of wire or foil fusible elements were in use to protect telegraph cables and lighting installations as early as 1864. A fuse was patented by Thomas Edison in 1890 as part of his electric distribution system.

The Unicode character for the fuse’s schematic symbol, found in the Miscellaneous Technical block, is U+23DB.

Different types of Electric fuses are available in the market and they are classified on the basis of different aspects. But mainly, fuses can be divided into two categories based on the input supply as follows:

Given below is a flowchart of further classification of fuse: 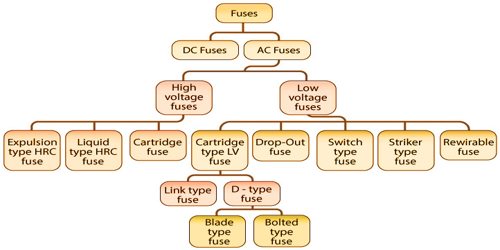 Automotive fuses are also used to protect the wiring and electrical equipment for vehicles. There are several different types of automotive fuses and their usage is dependent upon the specific application, voltage, and current demands of the electrical circuit. Automotive fuses can be classified into four distinct categories:

Most automotive fuses rated at 32 volts are used on circuits rated 24 volts DC and below. Some vehicles use a dual 12/42 V DC electrical system that will require a fuse rated at 58 V DC.

Dimensions and Functions of Fuses –

Fuses can be built with different sized enclosures to prevent interchange of different ratings of fuse. For example, bottle style fuses distinguish between ratings with different cap diameters. Automotive glass fuses were made in different lengths, to prevent high-rated fuses being installed in a circuit intended for a lower rating.

Special features — Glass cartridge and plug fuses allow direct inspection of the fusible element. Other fuses have other indication methods including:

In the field of electrical engineering, a fuse is a device that provides over-current protection to the functional electrical circuit. Here, we have listed a few major functions of the fuse.

The markings on the fuse carry information such as the Ampere rating, voltage rating and interruption rating.

A fuse is an automatic means of removing power from a faulty system; often abbreviated to ADS (Automatic Disconnection of Supply). Circuit breakers can be used as an alternative to fuses, but have significantly different characteristics. The primary use of an electric fuse is to protect electrical equipment from excessive current and to prevent short circuits or mismatched loads. Electrical fuses play the role of miniature circuit breakers. Apart from protecting equipment, they are also used as safety measures to prevent any safety hazards to humans.