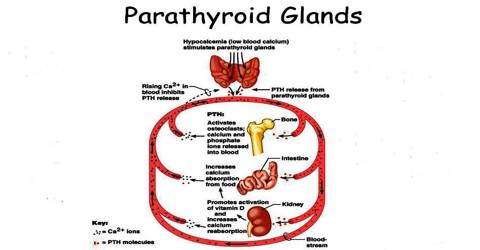 Parathyroid Glands consist of four separate glands located on the posterior surface of the lobes of the thyroid gland. The cells of parathyroid glands are arranged in a compact mass and are of two types: small chief cells or principal cells and large oxyphil cells or eosinophil cells. The cells are enclosed by a delicate connective tissue capsule. The chief cells are much more numerous than the oxyphil cells. The latter are absent in the young and appear a little before the age of puberty.

Parathyroid development is regulated by a number of genes, including those coding for several transcription factors. Parathyroid hormone “regulates the metabolism of calcium.” Calcium is not only a major component of bones, but is also indispensable for blood clotting and for the contraction of every muscle in the body, including the heart. It is also an essential mineral for the proper functioning of brain cells.