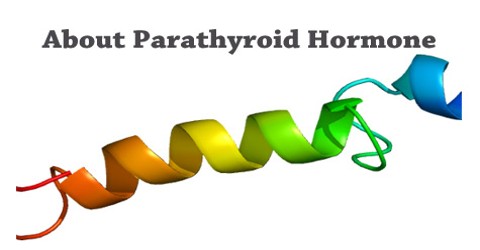 Parathyroid Hormone (PTH) is a hormone of the parathyroid gland that regulates the metabolism of calcium and phosphorus in the body. PTH also called parathormone or parathyrin, which is an ongoing process in which bone tissue is alternately resorbed and rebuilt over time. A higher-than-normal amount of parathyroid hormone causes high levels of calcium in the blood and may be a sign of disease.

Parathyroid Hormone (PTH) is secreted by the chief cells of the parathyroid glands as a polypeptide containing 84 amino acids, which is a prohormone; effective hormone-receptor interaction requires solely the 34-N-terminal amino acids. While PTH acts to increase the concentration of ionic calcium (Ca2+) in the blood, calcitonin, a hormone produced by the parafollicular cells (C cells) of the thyroid gland, acts to decrease ionic calcium concentration.

The coordinated actions of Parathyroid Hormone (PTH) on bone, kidney, and intestine increase the flow of calcium into the extracellular fluid (ECF) and increase the concentration of calcium in blood. The production of PTH is stimulated by any decrease in blood calcium, and conversely, the secretion of the hormone is inhibited by an increase in serum calcium. The biological actions of PTH and the negative feedback regulation of its production are the most important homeostatic mechanisms for the rapid control of the concentration of calcium and ECF. The cloning of the receptor revealed that PTH/PTHrP receptor structure is similar to that of other G-protein coupled receptors: an amino-terminal (N-terminal) extension, seven transmembrane helical spanning domains (TMS), three extracellular (EC) and three intracellular (IC) loops, and an intracellular carboxyl terminal region.

Parathyroid Hormone (PTH) is connected to blood calcium levels. Understanding this hormone and its role in the body helps you take charge of people’s health.

Parathyroid hormone helps prevent low calcium levels by acting on the bones, intestine and kidneys. In the bones, the hormone triggers the release of calcium stores from the bones to the blood. This can lead to bone destruction.

In the intestines, parathyroid hormone helps with vitamin D metabolism. This, in turn, allows the body to absorb more of the calcium it digests from food. Finally, in the kidneys the hormone stops the release of calcium through the urine, while also increasing vitamin D production.

Secretion of Parathyroid Hormone (PTH) is determined chiefly by serum ionized calcium concentration through negative feedback. Calcium-sensing receptors located on parathyroid cells. PTH is secreted when (Ca2+) is decreased; Calcitonin is secreted when serum calcium levels are elevated. The G-protein coupled calcium receptors bind extracellular calcium and may be found on the surface on a wide variety of cells distributed in the brain, heart, skin, stomach, C cells, and other tissues. In the parathyroid gland, high concentrations of extracellular calcium result in activation of the Gq G-protein coupled cascade through the action of phospholipase C. This hydrolyzes phosphatidylinositol 4,5-bisphosphate (PIP2) to liberate intracellular messengers IP3 and diacylglycerol (DAG). Ultimately, these two messengers result in a release of calcium from intracellular stores into the cytoplasmic space. Having too much of the hormone can cause a condition known as hypercalcaemia, which increases blood calcium levels. This does not cause obvious symptoms in mild cases, but if levels rise too high it can cause digestive upset, constipation, depression, lethargy, weakness, joint pain and excessive thirst.

Too little parathyroid hormone causes a rare condition called hypoparathyroidism, which leads to low blood calcium levels. This is fairly easy to treat using vitamin D and oral calcium tablets, once it is discovered.