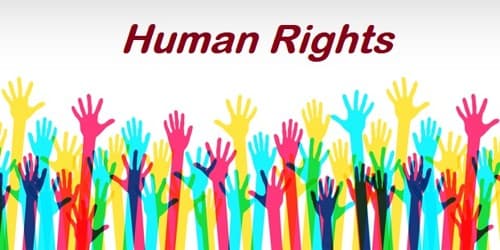 [This is sample Open or Public Speech On Human Rights. The concept of Human rights has been constantly evolving over a period of time. In today’s world, most of the countries recognize human rights and make it a part of their constitutional provisions.

United Nations Organization (UNO) has recognized the importance of Human rights by declaring December 10th as World Human Rights day. We are gathered here to celebrate the diversity in this amazing country today. Diversity is something that makes countries great. It does not only show that we all humans are beautifully different but it also shows that we human beings have a tendency to acknowledge the individuality of each other. Human rights are defined as those set of rights which are fundamental to human existence.

As citizens of a nation, it is of primary importance that we have an understanding of the rights that we are entitled to. When I look around myself today the world has changed a lot from what it used to be a few years back, in some things it has definitely progressed like the technology and the education and most importantly in recent times the women rights but it has also gone darker from the other side it’s the attitude towards minority the unwelcoming behavior of few political leaders. Human rights are those rights that every person on this earth is entitled to merely on account of being a human being.

Human rights are a set of rights that are given to every human being regardless of his/her gender, caste, creed, religion, nation, location or economic status. I just want everyone who can listen to me at this very moment to always treat the other person as a human being first not as nationality, race or religion but just as a person who might be a little different looking but having all the same right as yours. All people equally have human rights, eliminating all kinds of discrimination. No race or no religion is superior to humanity. The last few years have seen some drastic changes when it came to women rights and the result has been so positive people are acknowledging the contribution a woman has to offer to the economy of society now. The objectification has been asked to do less and competency is what they should be judged on by now. Human rights are very important for making sure that all humans get treated equally.

Though human rights are protected by various laws, these are still violated by people, groups and even by the state at times. Today we see that where one country has closed its gates on the immigrants today has disappointed the people around the globe and another equally competent country who has open the doors to their country has won the heart of people all around the world. Every individual deserves to enjoy basic human rights. At times, some of these rights are denied or abused by the state. Whenever human rights will be suppressed that the country will lose its equilibrium state after a while and whenever a country will acknowledge how precious every human life is it will be prosperous and successful. Government is taking measures to monitor these abuses with help from certain non-government organizations.