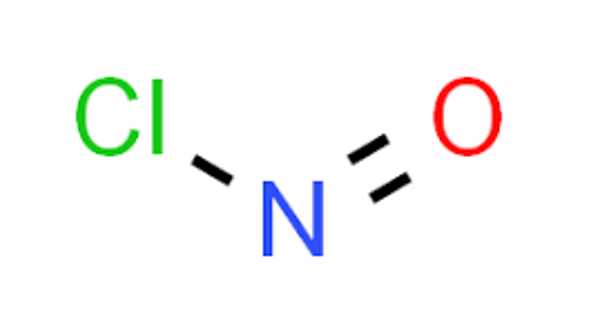 The chemical compound with the formula NOCl is nitrosyl chloride. It is a yellow gas that is most commonly encountered as a byproduct of the decomposition of aqua regia, a mixture of hydrochloric and nitric acid. It is a powerful electrophile and oxidizer. Tilden’s reagent is another name for it.

Nitrosyl Chloride is an orange-red gas or a dark red liquid with an unpleasant odor. It is used as a catalyst, an intermediate, a flour bleaching agent, and in synthetic detergents. It has the appearance of a yellow to yellowish-red gas. At -5.5°C, it liquefies. It is extremely toxic when inhaled.

Noncombustible, but hastens the combustion of combustible materials. Water decomposes it to form corrosive hydrochloric acid. In general, vapors are heavier than air. Long-term exposure to fire or heat can cause containers to explode violently.

Since nitrosyl chloride is chemically simple and thermally stable, it can be produced in many ways.

Combining nitrosylsulfuric acid and HCl affords the compound. This method is used industrially.

NOCl forms by the direct combination of chlorine and nitric oxide; This reaction reverses above 100 °C.

Another method of producing nitrosyl chloride is by direct union of the elements at 400 °C, although there is some regression as above.

Cyclohexanone oxime hydrochloride is formed when NOCl and cyclohexane react photochemically. This method takes advantage of NOCl’s proclivity for photodissociation into NO and Cl radicals. Caprolactam, a precursor to Nylon-6, is formed from the oxide.