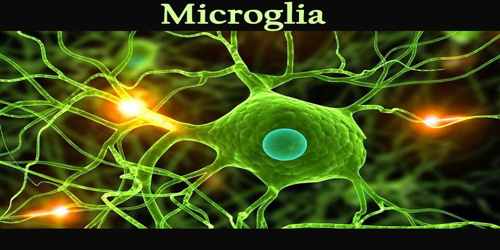 Microglia is any of the small neuroglial cells of the central nervous system (CNS) having long processes and ameboid and phagocytic activity at sites of neural damage or inflammation. It is also called Hortega cell. Microglia account for 10–15% of all cells found within the brain. As the resident macrophage cells, they act as the first and main form of active immune defence in the central nervous system (CNS). 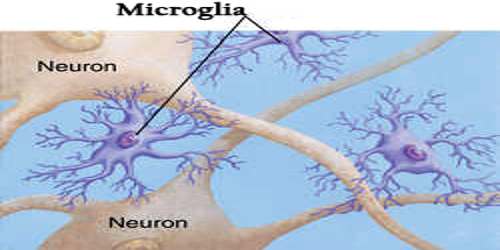 The brain and spinal cord, which make up the CNS, are not usually accessed directly by pathogenic factors in the body’s circulation due to a series of endothelial cells known as the blood–brain barrier, or BBB. The BBB prevents most infections from reaching the vulnerable nervous tissue. In the mature brain, microglia can respond to changes in sensory activity and can influence neuronal activity acutely and over the long term. Microglia seems to be particularly involved in monitoring the integrity of synaptic function.

Microglia were first identified by histological staining with silver carbonate between 1919 and 1921 by Spanish neuroanatomist Pio del Rio-Hortega, who was a student of Spanish histologist Santiago Ramón y Cajal, best known for his work in establishing neurons as the basic units of nervous tissue.

Structure and Functions of Microglia

As the name microglia suggests, these cells are small—the smallest of all the neuroglia. Microglia nuclei are typically oval-shaped, and projecting out from their cell bodies are slender elongated processes that enable the cells to move via chemotaxis (movement along a chemical gradient). For many years the function of microglia was unclear. However, today it is known that these cells mediate immune responses in the central nervous system by acting as macrophages, clearing cellular debris and dead neurons from nervous tissue through the process of phagocytosis (cell eating). 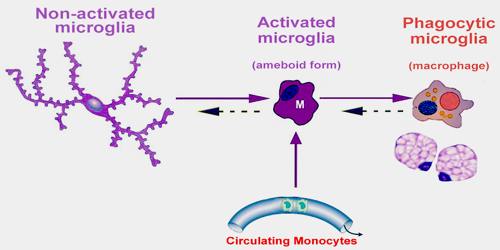 Microglial cells are extremely plastic, and undergo a variety of structural changes based on location and system needs. This level of plasticity is required to fulfill the vast variety of functions that microglia perform. The ability to transform distinguishes microglia from macrophages, which must be replaced on a regular basis, and provides them the ability to defend the CNS on extremely short notice without causing immunological disturbance. Microglia adopts a specific form, or phenotype, in response to the local conditions and chemical signals they have detected.

Post-inflammation, microglia undergoes several steps to promote regrowth of neural tissue. These include synaptic stripping, secretion of anti-inflammatory cytokines, recruitment of neurons and astrocytes to the damaged area, and formation of gitter cells. Without microglial cells regrowth and remapping would be considerably slower in the resident areas of the CNS and almost impossible in many of the vascular systems surrounding the brain and eyes.

Functions in the Healthy Brain

Microglia are the primary immune cells of the CNS, and are highly similar to peripheral macrophages. They act as the major inflammatory cell type in the brain, and respond to pathogens and injury by becoming “activated” – a process whereby they rapidly change morphology, proliferate and migrate to the site of infection/injury where they phagocytose and destroy pathogens as well as remove damaged cells. As part of their response they secrete cytokines and chemokines, as well as prostaglandins, NO and reactive oxygen species, which help to elevate and direct the immune response. 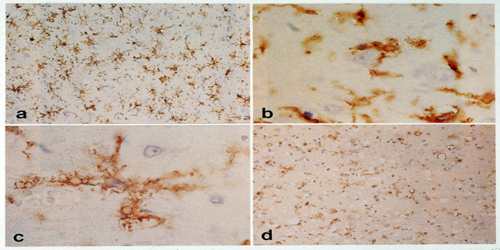 In developmentally mature organisms microglia also can be generated from white blood cells known as monocytes that circulate in the blood and move into the central nervous system. Microglia are activated by inflammation in the central nervous system, which may be triggered by neurological degenerative disorders such as Alzheimer disease or by infectious diseases such as Creutzfeldt-Jakob disease.

Microglia undergoes a burst of mitotic activity during injury; this proliferation is followed by apoptosis to reduce the cell numbers back to baseline. Activation of microglia places a load on the anabolic and catabolic machinery of the cells causing activated microglia to die sooner than non-activated cells. To compensate for microglial loss over time, microglia undergoes mitosis and bone marrow derived progenitor cells migrate into the brain via the meninges and vasculature.