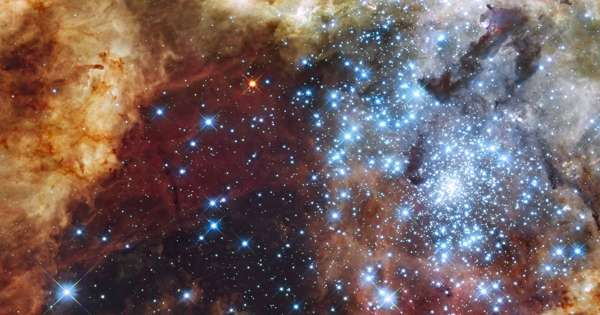 Melnick 34 is a binary Wolf–Rayet star near R136 in the Large Magellanic Cloud’s 30 Doradus complex (also known as the Tarantula Nebula). Both parts are among the most massive and luminous stars ever discovered. It has the most massive binary system with x-ray luminosity and a WN5h spectral type.

Melnick 34, also known as BAT99-116, is a binary star with a 155-day orbital period. It has a high x-ray luminosity, which is typical of colliding-wind binaries, as well as periodic variations in luminosity, spectral absorption, and x-ray brightness.

The orbit was calculated using data from spectroscopic observations made with the Very Large Telescope. The two components have the same WN5h spectral type, and their spectral lines change every 155 days, indicating projected orbital motions of 130 km/s and 141 km/s, respectively. The similar orbital speeds indicate that the two components have similar masses; assuming a 50° inclination, the secondary has amassed 92 percent of the primary. The inclination of 50° best matches the two stars’ orbital properties to their observed properties. The primary is labeled A, and the second is labeled B. With a periastron separation of about 0.9 AU, the orbit is moderately eccentric.

Mk34’s two components have identical WN5h spectral classes, with spectra containing prominent emission lines of highly ionized helium, nitrogen, and carbon. The h suffix indicates that the spectrum contains hydrogen lines that are not typically seen in Wolf-Rayet spectra. The strength of the helium emission lines in the spectrum indicates that the star’s outer layers are composed of 35% helium.

The masses of the two components, as determined by their spectra, are approximately 148 M and 135 M, respectively. The masses determined from the orbits of the stars are strongly influenced by the orbit’s inclination, which is unknown. Orbits with an inclination close to 50° have the best match with observed masses.

Strong mass loss produces a dense stellar wind, which causes the emission line spectra of the two stars in the Mk34 system. Both stars have a stellar wind with a velocity of about 2500 km/s, causing each star to lose more mass than the sun every 10,000 years, a billion times stronger than the sun’s wind.