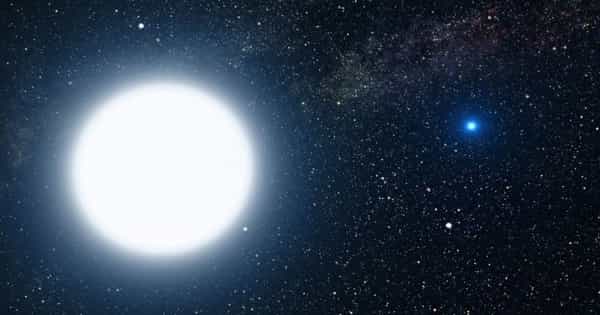 The star LBV 1806-20 is a blue supergiant. It is two million times brighter than the Sun. The star is 5 million times brighter than the sun. It is located in the Sagittarius constellation but is not visible to the naked eye due to dust. It is located approximately 45,000 light-years from Earth and can only be detected with infrared telescopes because all of its visible light is absorbed by dust particles in space. The star is 1,135 times the size of the Sun.

LBV 1806-20 is a candidate luminous blue variable (LBV) and likely binary star located approximately 28,000 light-years (8,700 pc) from the Sun, near the Milky Way’s center. It has a mass estimated to be around 36 solar masses and a variable luminosity estimated to be around two million times that of the Sun. It is extremely bright, but it is invisible to the Solar System at visible wavelengths because only one billionth of its visible light reaches us.

When it was discovered, LBV 1806-20 was thought to be the most luminous and massive star ever discovered, challenging scientific understanding of the formation of massive stars. Recent estimates bring it closer to Earth, which, combined with its binary nature, means it is now well within the expected range of parameters for extremely luminous stars in the galaxy. It is estimated to be 2 million times as bright as the sun, making it one of the brightest stars in the galaxy.

Although the star is 8th magnitude at 2 micrometers in the near-infrared, it is estimated to be around 35th magnitude at visible wavelengths, which is undetectable with current equipment. Intervening dust in the direction of the Galactic Center absorbs an estimated 29 magnitudes at visual wavelengths, so the majority of observations are made with infrared telescopes. It is suspected of being an LBV based on its luminosity and spectral type, but despite the name, the characteristic photometric and spectroscopic variations have yet to be observed, so it remains only a candidate.