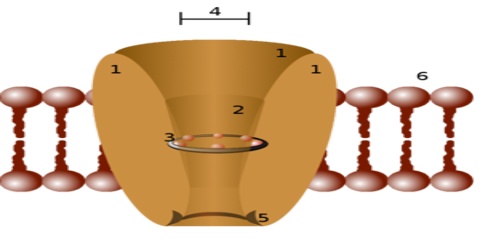 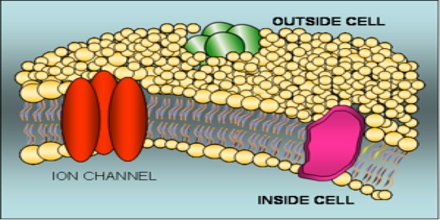 Each living cell is surrounded by a membrane which separates the world within the cell from its exterior. In this membrane there are channels, through which the cell communicates with its surroundings. These channels consist of single molecules or complexes of molecules and have the ability to allow passage of charged atoms that is ions.

The regulation of ion channels influences the life of the cell and its functions under normal and pathological conditions. The Nobel Prize in Physiology or Medicine for 1991 is awarded for the discoveries of the function of ion channels. The two German cell physiologists Erwin Neher and Bert Sakmann have together developed a technique that allows the registration of the incredibly small electrical currents that passes through a single ion channel.

The study of ion channels often involves biophysics, electrophysiology, and pharmacology, while using techniques including voltage clamp, patch clamp, immunohistochemistry, X-ray crystallography, fluoroscopy, and RT-PCR. Their classification as molecules is referred to as channelomics. 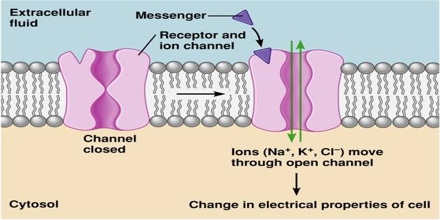 Ion channel receptors are usually multimeric proteins located in the plasma membrane. Each of these proteins arranges itself so that it forms a passageway or pore extending from one side of the membrane to the other. These passageways, or ion channels, have the ability to open and close in response to chemical or mechanical signals. When an ion channel is open, ions move into or out of the cell in single-file fashion. Individual ion channels are specific to particular ions, meaning that they usually allow only a single type of ion to pass through them. Both the amino acids that line a channel and the physical width of the channel determine which ions are able to wiggle through from the cell exterior to its interior, and vice versa. The opening of an ion channel is a fleeting event. 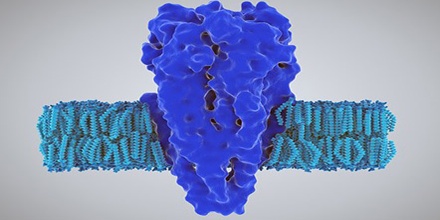 By the mid 1800s biophysical studies of osmosis and urine filtration led to the hypothesis that there are pores of molecular diameter in biological membranes. This concept was presented in textbooks of physiology from then on as one of several unproven possibilities. At the time the word membrane was applied without distinction to sheets of tissue such as epithelia and to the then hypothetical envelope of cells that is known today as the plasma membrane.

Functional studies during the period 1945 to 1970 revealed voltage-gated and ligand-gated channels in nerve and muscle plasma membranes and finally proved that they are aqueous pores. Their use of voltage clamp allowed Alan L. Hodgkin and Andrew F. Huxley to determine kinetic rules for the voltage-dependent opening of Na+ and K+ channels in the squid giant axon (Hodgkin and Huxley, 1952). Bernard Katz and colleagues (Katz, 1966) determined kinetic rules for ACh-gated opening of nAChRs at the frog neuromuscular junction. Subsequently patch clamp showed that the opening and closing transitions of individual channel molecules are sudden, all-or-nothing events as the flexible channel protein snaps from one conformation to another. Modern arguments for an aqueous pore include: the very high throughput rate for ion, the permeability to only small ions, block by slightly larger ions, and now definitively the crystal structures that show the water-filled transmembrane pathway with several ions in it.

How Does an Ion Channel Operate?

Ion channels are of different types. Some only permit the flow of positively charged sodium, potassium or calcium ions, others only negatively charged chloride ions. Neher and Sakmann discovered how this specificity is accomplished. One reason is the diameter of the ion channel, which is adapted to the diameter of a particular ion. In one class of ion channels, there are also two rings of positively or negatively charged amino acids. They form an ionic filter, which only permits ions with an opposite charge to pass through the filter. In particular Sakmann through a creative interaction with different molecular biologists elucidated how the different parts of the ion channel molecule(s) operate. Neher and Sakmann’s scientific achievements have radically changed our views on the function of the cell and the contents of text books of cell biology. Their methods are now used by thousands of scientists all over the world. 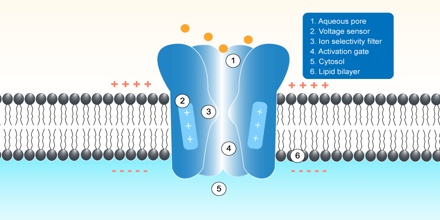 The major contribution of this discovery was the enormous use of the patch clamp technique. This technique was combined with the new methods to study the different parts of the ion channels in cells. Through this procedure, it has been possible to identify what makes an ion channel select only one type of ion, or be sensitive to a particular type of chemical transmitter. Through this technique, our standard research procedures to study ion channels have been changed and became more efficient, more valid and more specific.

Researches are now being conducted about the participation of ion channels during the secretion of insulin by the pancreas, when the heart is contracting, or when we think or remember something. Drugs now are being developed to target specific types of ion channel, which are of importance in disease like anxiety, cardiovascular disease, epilepsy, and diabetes.

The classification of Mental Disorders

Signs and Symptoms of Sports Hernia