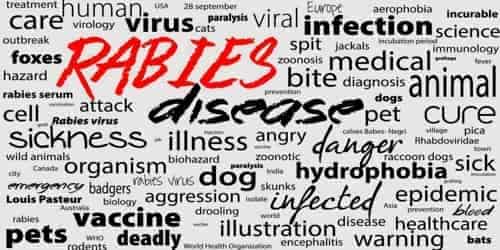 The term is derived from the Latin rabies, “madness”. This, in turn, may be related to the Sanskrit rabhas, “to rage”. The Greeks derived the word lyssa, from lud or “violent”; this root is used in the genus name of the rabies virus, Lyssavirus.

Rabies is caused by a virus that affects the central nervous system, particularly causing inflammation in the brain. Domestic dogs, cats, and rabbits, and wild animals, such as skunks, raccoons, and bats, are able to transfer the virus to humans via bites and scratches. The key to fighting the virus is a quick response. 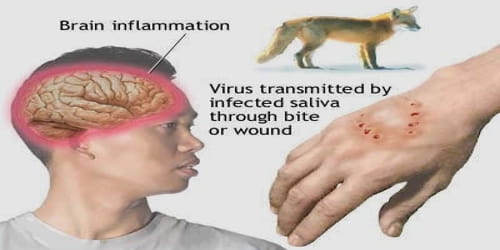 Globally, dogs are the most common animal involved. More than 99% of rabies cases in countries where dogs commonly have the disease are caused by dog bites. In the Americas, bat bites are the most common source of rabies infections in humans, and less than 5% of cases are from dogs. Rodents are very rarely infected with rabies. The disease can only be diagnosed after the start of symptoms.

Rabies is a 100% vaccine-preventable disease. Countries embarking on rabies elimination programmes have successfully experienced marked reductions, often progressing to the elimination of rabies. Elimination programs often revolve around mass dog vaccination campaigns, where at least 70% of the dog population should be covered in order to break the cycle of transmission in dogs, and to humans. 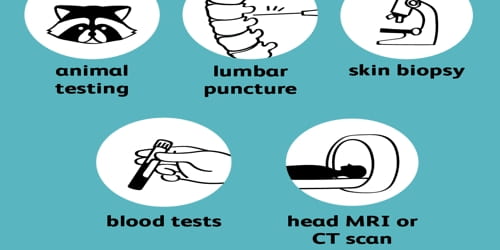 Diagnosis and Treatment of Rabies: Rabies can be difficult to diagnose, because, in the early stages, it is easily confused with other diseases or with aggressiveness. The reference method for diagnosing rabies is the fluorescent antibody test (FAT), an immunohistochemistry procedure, which is recommended by the World Health Organization (WHO).

Lab tests may show antibodies, but these may not appear until later in the development of the disease. The virus may be isolated from saliva or through a skin biopsy. However, by the time a diagnosis is confirmed, it may be too late to take action.

For this reason, the patient will normally start a course of prophylactic treatment at once, without waiting for a confirmed diagnosis.

Once a rabies infection is established, there’s no effective treatment. Though a small number of people have survived rabies, the disease is usually fatal. If a person is bitten or scratched by an animal that may have rabies, or if the animal licks an open wound, the individual should immediately wash any bites and scratches for 15 minutes with soapy water, povidone iodine, or detergent. This might minimize the number of viral particles.

After exposure and before symptoms begin, a series of shots can prevent the virus from thriving. This is usually effective.

It is not usually possible to find out whether the animal has rabies or not. It is safest to assume the worst and begin the course of shots. 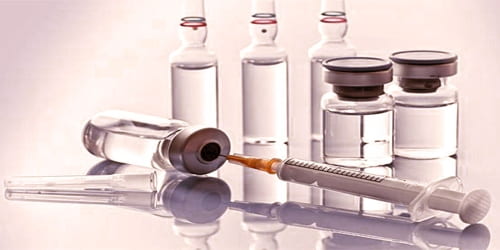 The pain and side effects of modern cell-based vaccines are similar to flu shots. The old nerve-tissue-based vaccinations that require multiple painful injections into the abdomen with a large needle are inexpensive but are being phased out and replaced by affordable World Health Organization intradermal-vaccination regimens.

Intramuscular vaccination should be given into the deltoid, not the gluteal area, which has been associated with vaccination failure due to injection into fat rather than muscle. In infants, the lateral thigh is recommended.

Side Effects of Rabies Treatment: The rabies vaccine and immunoglobulin can very rarely cause some side effects, including:

Prevention: Rabies is a serious disease, but individuals and governments can and do take action to control and prevent, and, in some cases, wipe it out completely. 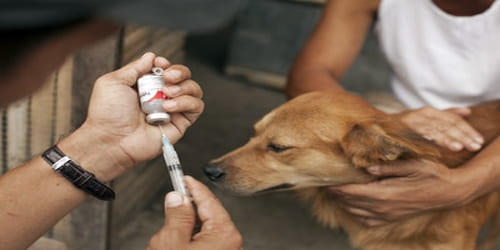 To reduce our risk of coming in contact with rabid animals:

If bitten by an animal, washing the wound with soap and water for 10 to 15 minutes and contacting a health care provider to determine if post-exposure prophylaxis is required. How to Avoid Orthopedic Injuries 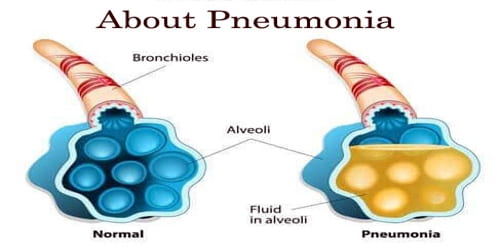