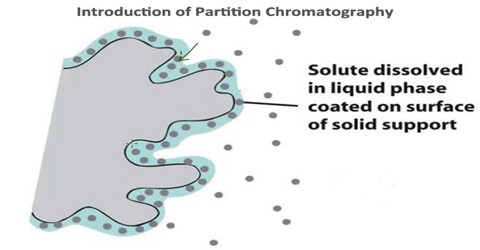 The process of separating mixtures of chemical compounds by passing them through a column that contained a solid stationary phase that was eluted with a mobile phase (column chromatography) was well known at that time. Chromatographic separation was considered to occur by an adsorption process whereby compounds adhered to a solid media and were washed off the column with a solvent, mixture of solvents, or solvent gradient. In contrast, Martin and Synge developed and described a chromatographic separation process whereby compounds where partitioned between two liquid phases similar to the separatory funnel liquid-liquid separation dynamic. This was an important departure, both in theory and in practice, from adsorption chromatography.

The term chromatography literally means color writing, and denotes a method by which the substance to be analyzed is poured into a vertical glass tube containing an adsorbent, the various components of the substance moving through the adsorbent at different rates, according to their degree of attraction to it, and producing bands of color at different levels of the adsorption column. The term has been extended to include other methods utilizing the same principle, although no colors are produced in the column. The technique is a valuable tool for the research biochemist and is readily adaptable to investigations conducted in the clinical laboratory. For example, chromatography is used to detect and identify in body fluids certain sugars and amino acids associated with inborn errors of metabolism.

Types and Applications of Partition Chromatography

Liquid-liquid chromatography uses liquid and the stationary phase is attached to a supporting matrix by physical means. As for example cellulose, starch or silica matrix is used to support water stationary phase and all these have the ability to bind physically as much as 50% water (w/v) and remain free floating powder. There are some advantages of liquid-liquid chromatography as for example silica, cellulose starch used are cheap, have a high capacity with broad selectivity.