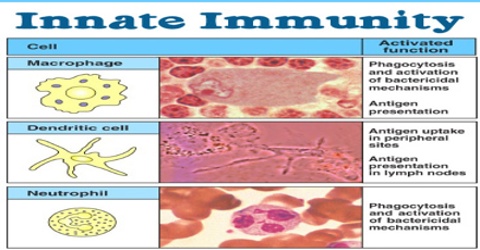 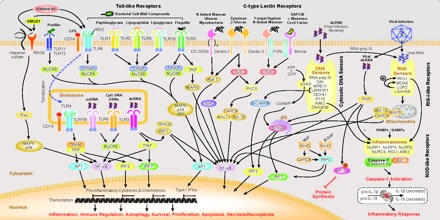 Innate (natural) immunity is so named because it is present at birth and does not have to be learned through exposure to an invader. It thus provides an immediate response to foreign invaders. However, its components treat all foreign invaders in much the same way. They recognize only a limited number of identifying substances (antigens) on foreign invaders. However, these antigens are present on many different invaders. Innate immunity, unlike acquired immunity, has no memory of the encounters, does not remember specific foreign antigens, and does not provide any ongoing protection against future infection.

Innate Immune responses are not specific to a particular pathogen in the way that the adaptive immune responses are. They depend on a group of proteins and phagocytic cells that recognize conserved features of pathogens and become quickly activated to help destroy invaders. Whereas the adaptive immune system arose in evolution less than 500 million years ago and is confined to vertebrates, innate immune responses have been found among both vertebrates and invertebrates, as well as in plants, and the basic mechanisms that regulate them are conserved. 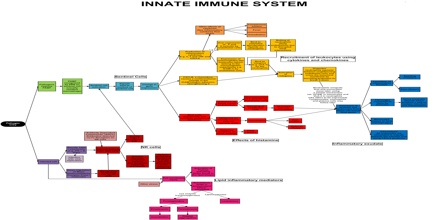 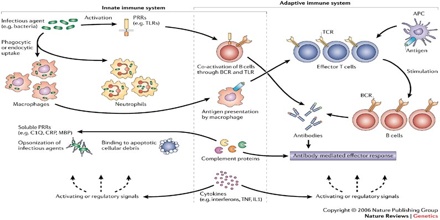 Evasion strategies that circumvent the innate immune system include intracellular replication, such as in Mycobacterium tuberculosis, or a protective capsule that prevents lysis by complement and by phagocytes, as in salmonella. Bacteroides species are normally mutualistic bacteria, making up a substantial portion of the mammalian gastrointestinal flora. Some species are opportunistic pathogens, causing infections of the peritoneal cavity. These species evade the immune system through inhibition of phagocytosis by affecting the receptors that phagocytes use to engulf bacteria or by mimicking host cells so that the immune system does not recognize them as foreign. Staphylococcus aureus inhibits the ability of the phagocyte to respond to chemokine signals. Other organisms such as M. tuberculosis, Streptococcus pyogenes, and Bacillus anthracis utilize mechanisms that directly kill the phagocyte. 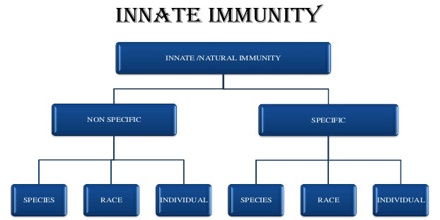 The Innate Immune responses are the first line of defense against invading pathogens. They are also required to initiate specific adaptive immune responses. Innate immune responses rely on the body’s ability to recognize conserved features of pathogens that are not present in the uninfected host. These include many types of molecules on microbial surfaces and the double-stranded RNA of some viruses. Many of these pathogen-specific molecules are recognized by Toll-like receptor proteins, which are found in plants and in invertebrate and vertebrate animals. In vertebrates, microbial surface molecules also activate complement, a group of blood proteins that act together to disrupt the membrane of the microorganism, to target microorganisms for phagocytosis by macrophages and neutrophils, and to produce an inflammatory response. The phagocytic cells use a combination of degradative enzymes, antimicrobial peptides, and reactive oxygen species to kill the invading microorganisms. In addition, they release signaling molecules that trigger an inflammatory response and begin to marshal the forces of the adaptive immune system. Cells infected with viruses produce interferons, which induce a series of cell responses to inhibit viral replication and activate the killing activities of natural killer cells and cytotoxic T lymphocytes. 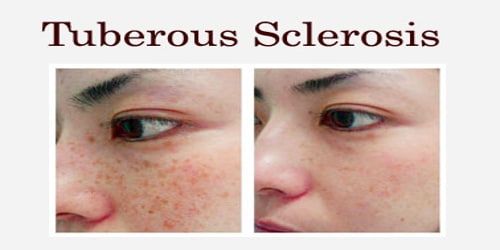 Define and Discuss on Bilateral Muscle 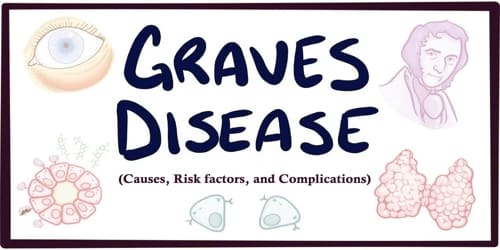