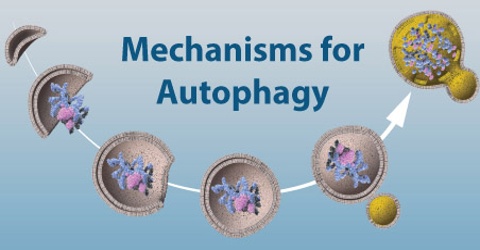 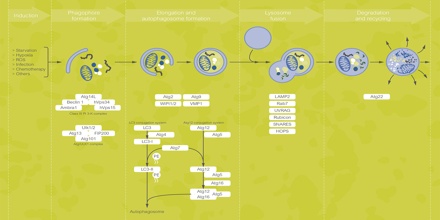 Autophagy is a tightly regulated pathway with an important housekeeping role, allowing cells to eliminate damaged or harmful components through catabolism and to recycle them to maintain nutrient and energy homeostasis. Autophagy is also a major protective mechanism which allows cell survival in response to multiple stress conditions such as nutrient or growth factor deprivation, hypoxia, reactive oxygen species (ROS), DNA damage or intracellular pathogens. 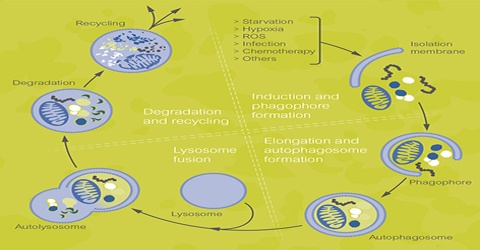 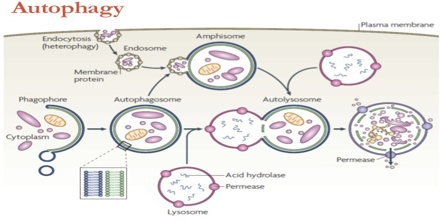 Autophagy is a catabolic ‘self-eating’ pathway that is emerging as a crucial integration point in cell physiology. With its own set of genes, the autophagy pathway communicates with virtually all signalling networks and organelles. Autophagy allows the orderly degradation and recycling of cellular components. In macroautophagy, targeted cytoplasmic constituents are isolated from the rest of the cell within a double-membraned vesicle known as an autophagosome. The autophagosome eventually fuses with lysosomes and the contents are degraded and recycled. Two additional forms of autophagy are also commonly described: microautophagy and chaperone-mediated autophagy (CMA). In disease, autophagy has been seen as an adaptive response to stress, which promotes survival, whereas in other cases it appears to promote cell death and morbidity. In the extreme case of starvation, the breakdown of cellular components promotes cellular survival by maintaining cellular energy levels.

Autophagy was known to occur at a low basal level, and to increase during differentiation and remodeling in a variety of tissues, including brain, intestine, kidney, lung, liver, prostate, skin and thyroid gland. It was speculated that autophagy might be a mechanism for coping with metabolic stress in response to starvation6 and that it might have roles in the pathogenesis of disease5. Furthermore, autophagy was shown to occur in a wide range of single cell eukaryotes and metazoa, e.g. amoeba, Euglena gracilis, Tetrahymena, insects and frogs, pointing to a function conserved throughout evolution.

Autophagy is essential for basal homeostasis; it is also extremely important in maintaining muscle homeostasis during physical exercise. Autophagy at the molecular level is only partially understood. A study of mice shows that autophagy is important for the ever changing demands of their nutritional and energy needs, particularly through the metabolic pathways of protein catabolism. In a 2012 study conducted by the University of Texas Southwestern Medical Center in Dallas, mutant mice (with a knock-in mutation of BCL2 phosphorylation sites to produce progeny that showed normal levels of basal autophagy yet were deficient in stress-induced autophagy) were tested to challenge this theory. Results showed that when compared to a control group, these mice illustrated a decrease in endurance and an altered glucose metabolism during acute exercise. 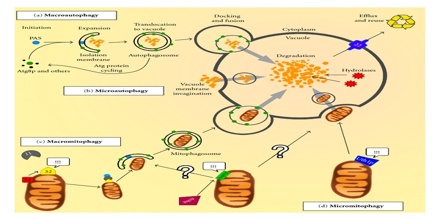 Following the seminal discoveries of Ohsumi, different subtypes of autophagy can now be distinguished depending on the cargo that is degraded. The most extensively studied form of autophagy, macroautophagy, degrades large portions of the cytoplasm and cellular organelles. Non-selective autophagy occurs continuously, and is efficiently induced in response to stress, e.g. starvation. In addition, the selective autophagy of specific classes of substrates – protein aggregates, cytoplasmic organelles or invading viruses and bacteria – involves specific adaptors that recognize the cargo and targets it to Atg8/LC3 on the autophagosomal membrane39. Other forms of autophagy include microautophagy, which involves the direct engulfment of cytoplasmic material via inward folding of the lysosomal membrane, and chaperone-mediated autophagy (CMA). In CMA, proteins with specific recognition signals are directly translocated into the lysosome via binding to a chaperone complex.

The Nobel Prize for “Mechanisms for Autophagy” 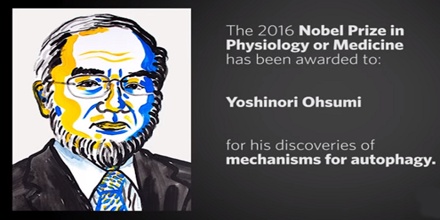 The Nobel prize in medicine has been awarded to a Japanese cell biologist for discoveries on how cells break down and recycle their own components.

Yoshinori Ohsumi, 71, will receive the prestigious 8m Swedish kronor (£718,000) award for uncovering “mechanisms for autophagy”, a fundamental process in cells that scientists believe can be harnessed to fight cancer and dementia.

Autophagy is the body’s internal recycling programme – scrap cell components are captured and the useful parts are stripped out to generate energy or build new cells. The process is crucial for preventing cancerous growths, warding off infection and, by maintaining a healthy metabolism, it helps protect against conditions like diabetes.

Dysfunctional autophagy has been linked to Parkinson’s disease, type 2 diabetes, cancer and a host of age-related disorders. Intense research is underway to develop drugs that can target autophagy to treat various diseases. Facial Recognition and Alzheimer’s Disease are being Investigated by Researchers

Retinal Detachment: Cause, Symptoms and Treatment