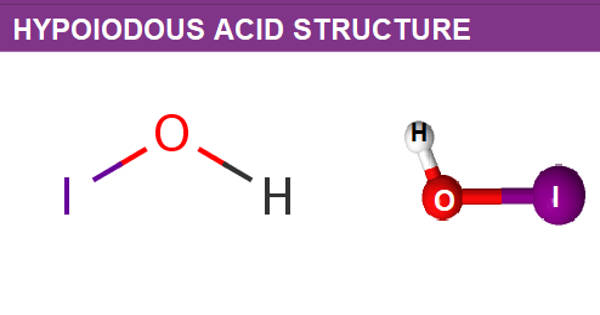 Hypoiodous acid is a greenish-yellow solution. It is an inorganic compound with the chemical formula HIO. It is an iodine oxoacid. It forms when an aqueous solution of iodine is treated with mercuric or silver salts.  It is the conjugate acid of a hypoiodite. It rapidly decomposes by disproportionation:

Iodine acts as a catalyst that reacts with hydroxyoxidanium ion to form hypoiodous acid. It is also formed along with iodide ions by dissolving iodine in dilute alkali or by the action of mercuric oxide upon iodine and water. Hypoiodites of alkali and alkaline earth metals can be made in cold dilute solutions if iodine is added to their respective hydroxides.

A hypoiodous acid is an inorganic compound having a molecular formula of HOI. It occurs when an iodine solution reacts with mercury or silver salts. The removal of protons results in the formation of hypoiodite.

The acid HOI is highly unstable and weak compared to other acids. Mostly, one can obtain it via the treatment of mercury oxide with iodine in an aqueous solution. Besides, it can also form unstable salts in a solution when iodine reacts with an alkali. When iodine reacts with cold and dilute sodium hydroxide solution sodium hypoiodite is formed which undergoes hydrolysis to give hypoiodous acid.

Another reaction possible is –

Hypoiodous Acid is a volatile iodine species neither elemental nor organic, which has been found in steam/air atmospheres. Hypoiodous acid is a weak acid with a pKa of about 11. The conjugate base is hypoiodite (IO−). Salts of this anion can be prepared by treating I2 with alkali hydroxides. They rapidly disproportionate to form iodides and iodates.

It is a part of an iodine species that has a volatile nature. It forms a greenish-yellow liquid that is highly unstable in the state. Mostly, it occurs as an inorganic complex dissolving quickly in most aqueous solutions.