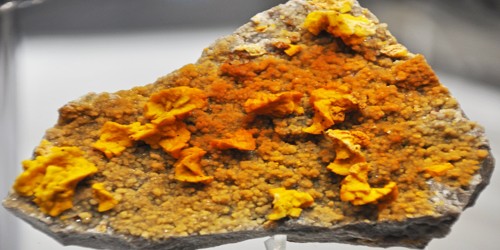 Greenockite is a rare cadmium bearing metal sulfide mineral consisting of cadmium sulfide (CdS) in crystalline form. Greenockite crystallizes in the hexagonal system. Although it is the most common cadmium mineral, most of the world’s supply of cadmium is supplied through the processing of zinc and lead ores where cadmium is a common trace element.

It was first recognized in 1840 in Bishopton, Scotland, during the cutting of a tunnel for the Glasgow, Paisley and Greenock Railway. The mineral was named after the landowner Lord Greenock (1783–1859). 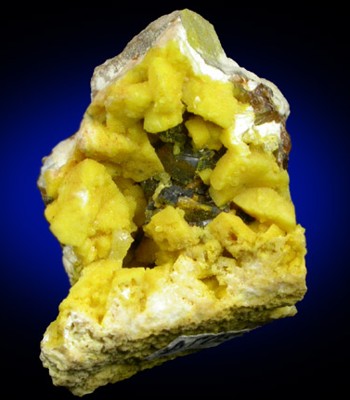 It occurs as massive encrustations and as hemimorphic six-sided pyramidal crystals which vary in color from a honey yellow through shades of red to brown. The Mohs hardness is 3 to 3.5 and the specific gravity is 4.8 to 4.9.

Occurrence: As earthy coatings, especially on sphalerite, in which it also occurs as a substituent; also rarely as crystals in cavities in mafic igneous rocks; in high-temperature hydrothermal vein deposits.

It occurs with other sulfide minerals such as sphalerite and Galena, and is the only ore mineral of cadmium, most cadmium is recovered as a byproduct of copper, zinc, and lead mining. It is also known from the lead-zinc districts of the central United States.

Greenokite, also known as “cadmium ochre”, was used as a yellow pigment prior to cadmium being recognized as a toxic element. The extracted cadmium has a various industrial use, such as electrical nickel-cadmium (NiCd) rechargeable batteries, electroplating, high temp alloys, plating steel and other metals that corrode easily and use in control rods for some nuclear reactors.