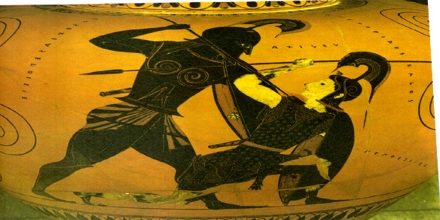 Achilles was a hero in Greek mythology and one of the main characters that participated in the Trojan War. When Achilles was born, his mother wanted to make him immortal and thus, dipped him in the river Styx. The death of Achilles is not narrated in the Iliad, although it was predicted by Hector with his dying breath. Paris, the brother of Hector, managed to kill the hero with an arrow that landed on Achilles’ heel, the only vulnerable part of his body. The arrow was poisoned and some sources say that it was guided by the god Apollo.