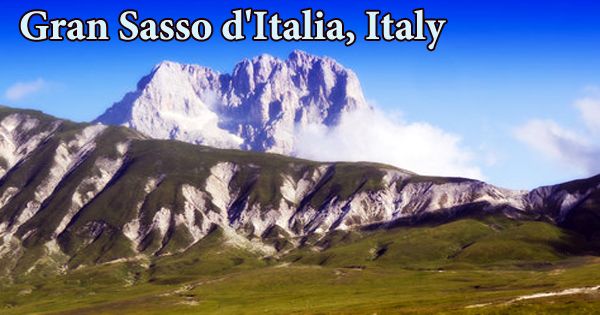 Gran Sasso d’Italia (Italian: ɡran ˈsasso diˈtaːlja; lit. ’Great Rock of Italy‘), is a mountain range in the Abruzzi geographic region of central Italy that stretches for about 22 miles (35 kilometers) in a west-northwest–east-southeast direction and contains Corno Grande, or Monte (mount) Corno, the Apennines’ highest point (9,554 feet (2,912 m)). It is an Italian massif in the Apennine Mountains. Gran Sasso e Monti Della Laga National Park contains the mountain. The top is snow-covered for the majority of the year, and the little Calderone glacier, Europe’s southernmost, is located on the north slope of Corno Grande.

The three main summits of the Gran Sasso are Corno Grande, the highest peak in the Apennines at 2,912 meters (9,554 feet), Corno Piccolo, which is adjacent, and Pizzo d’Intermesoli, which is separated from the other two peaks by Val Maone, a deep valley. Wild boars still wander the Alpine region below the top, and extensive beech and pine forests can be found. Winter sports enthusiasts and mountaineers frequent the region. Imperatore, a plateau in the middle of the Gran Sasso group at an average elevation of 1800 meters above sea level, has an exceptionally significant fauna and vegetative inheritance.

The ash coloring of Corno Grande and Corno Piccolo is due to their limestone and dolomite makeup. For much of the year, the peaks are covered with snow, albeit the amount of snowfall looks to be decreasing with each decade. The fauna is diverse, with uncommon species such as the Apennine Wolf and Wild Cat, as well as wild boars, squirrels, and foxes, all of which are frequent; more unusual are the Chamois, which were just recently reintroduced to the area. “The Sleeping Giant” is how Corno Piccolo is known. This is related to the appearance of a reclining face profile.

Thousands of visitors visit each year to have fun, but until about 70 or 80 years ago, these mountains were simply a tough environment for the locals. These rough mountain dwellers were primarily shepards (it is estimated that over 2,000,000 sheep grazed on the meadows of Gran Sasso during the sixteenth century), but also hunters and wool-sellers; they rarely lived and died between these mountains, and were frequently forced by famine to flee their towns in search of fortune in distant lands. The forests are primarily made up of beech, with holly, maples of various varieties, mountain and fowler sorbs, cherry trees, wild apple and pear trees, and yew trees appearing on occasion.

The little woods of white fir trees (Selva di Cortino, Bosco Martese), remnants of the original Apennine mixed gathering of fir trees and beeches, deserve special note. The Calderone glacier, located below the Corno Grande’s peak, was the southernmost known glacier in Europe until 2009; deglaciation has substantially reduced the glacier’s size. Large flocks of sheep guarded by Maremmano-Abruzzese sheepdogs, as well as herds of cattle and semi-wild horses, graze the Gran Sasso’s mid- to lower slopes in the spring, summer, and autumn. Field grasses and meadowland wildflowers carpet the pastures.

Despite its proximity to Rome and the events of the Gran Sasso raid in 1943, the Gran Sasso is notably free of visitors during the winter and mountain climbers and hikers during the other seasons. The undergrowth is densely packed with anemones, ranunculi, red lilies, and martagons, as well as belladonna, raspberry bushes, and many other species; the glades are brightened by the colors of various species of wild orchids, and the high grasslands are marked by the presence of a black bilberry moorland.

The Western Part, which begins at the Capanelle Pass (1300 m) on the border between the provinces of L’Aquila and Teramo, is divided into three sections: the Southern chain, the Monte Corvo Massif in the north-west, and the Pizzo d’Intermesoli Massif in the north-east. This is especially true in the summer, when the majority of Italians favor beach vacations while foreign visitors are more likely to visit northern Italy’s Alps. The Central Massif features the range’s highest peaks, Corno Grande (2912 m) and Corno Piccolo (2655 m), as well as the Appennines’ most alpinistic mountains, Corno Grande (2912 m) and Corno Piccolo (2655 m).