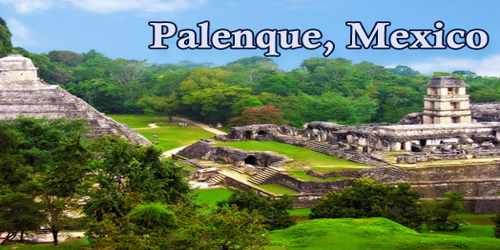 “Palenque” (Spanish pronunciation: (pa’leŋke); Yucatec Maya: Bàakʼ /ɓàːkʼ/), also anciently known as Lakamha (literally: “Big Water”), was a Mayan city of the Late Classic Period (c. 600-900 CE) Chiapas state in southern Mexico that flourished in the 7th century. Its original name is speculative; the site now shares the name the Spanish gave to a neighboring village. During the Mayan period, it was believed to be one of the most important cities of its day. The name ‘Palenque’ was given to it by the Spanish; its original name, like so much of Mayan history, is shrouded in mystery. The city’s ruins were designated a UNESCO World Heritage Site in 1987.

The Palenque ruins date from ca. 226 BC to ca. AD 799. After its decline, it was absorbed into the jungle of cedar, mahogany, and sapodilla trees, but has since been excavated and restored. It is located near the Usumacinta River in the Mexican state of Chiapas, about 130 km (81 mi) south of Ciudad del Carmen, 150 meters (490 ft) above sea level. It averages a humid 26 °C (79 °F) with roughly 2,160 millimeters (85 in) of rain a year. Without a buffer zone the total area of the archeological site is 1780 hectares, 09 areas and 49 square meters and 1,400 buildings have been recorded, of which only about 10% have been explored.

The Mayan civilization showed some unique skills in building temples and pyramids. They also showed a complex writing system and deep astronomical knowledge. The big mystery surrounding this fascinating (and, in some away, advanced) civilization revolves its disappearance. The Palenque builders used plaster to obtain a smooth finish, unlike the usual Mayan tooled-limestone construction. However, they used carving on the interior walls; the best examples are on tablets affixed to the walls with plaster. Stucco and terra-cotta images have been found. The elaborate palace complex includes three parallel walls housing two corridors covered with pointed vaults of the Palenque style.

One of the largest and best-preserved structures, the Temple of the Inscriptions, is noted for its hieroglyphic inscriptions. In 1952 a crypt was discovered under the temple, in which were found the jade-ornamented remains of what may have been a ruler-priest of the 7th century. Much of the history of Palenque has been reconstructed from reading the hieroglyphic inscriptions on the many monuments; historians now have a long sequence of the ruling dynasty of Palenque in the 5th century and extensive knowledge of the city-state’s rivalry with other states such as Calakmul and Toniná. The most famous ruler of Palenque was K’inich Janaab Pakal, or Pacal the Great (who ruled from 615 to 683 AD), whose tomb has been found and excavated in the Temple of the Inscriptions. 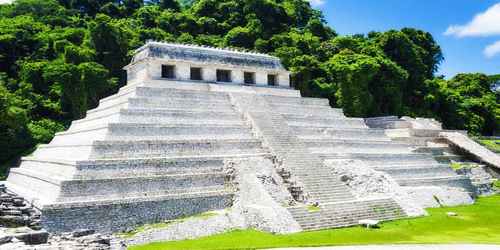 The best way to explore the site is to enter through the main (north) entrance, visit the main temples and structures and then wander around the fringe temples. The principal, and most attractive, ruin is the “Templo de las Inscripciones” (Temple of Inscriptions). The temple superstructure houses the second longest glyphic text known from the Maya world (the longest is the Hieroglyphic Stairway at Copan). The Temple of the Inscriptions records approximately 180 years of the city’s history from the 4th through 12th K’atun. The focal point of the narrative records K’inich Janaab’ Pakal’s K’atun period-ending rituals focused on the icons of the city’s patron deities prosaically known collectively as the Palenque Triad or individually as GI, GII, and GIII.

In the last 15 or 20 years, a great deal more of the site has been excavated, but currently, archaeologists estimate that only 5% of the total city has been uncovered.