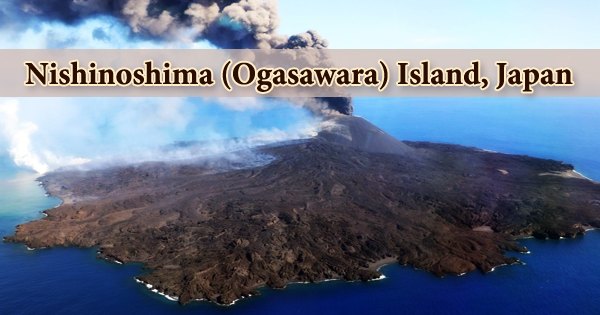 Nishi-no-Shima (Japanese: 西之島, “western island”), a volcanic island in the Ogasawara Arc about 1,000 kilometers south of Tokyo, Japan, erupted above sea level in November 2013 after 40 years of inactivity. Nishinoshima was originally the above-water portion of an underwater caldera’s ridge, but it was expanded in 1974 after further eruptions produced a new piece of the island. The island was around 2.7 km2 (1.0 sq mi) in size in 2016, and there were signs of numerous plant and animal species returning. Two years of activity were followed by two short eruptions in 2017 and 2018.

From early December 2019 until August 2020, the following eruption produced ash plumes, incandescent ejecta, and lava flows, as well as a huge pyroclastic cone with a wide summit crater and widespread lava flows that greatly extended the island. It covers over 4.1 km2 (1.6 sq mi) and has a circumference of nearly 2 km (1.2 mi) as of August 14, 2020. The genesis of andesitic lavas from Nishinoshima was studied using olivine-bearing phenocryst-poor andesites found in older underwater lavas from the volcano’s sides.

When the Spanish ship Rosario discovered the island in 1702, it was given the name “Jena Island.” That was the official name of the island until 1904, when it was changed to “Nishinoshima” (meaning “West Island”). The extremely high levels of thermal energy released by many lava flows, ash, and incandescent tephra, which peaked in early July, dramatically dropped in August and September. The summit crater and the fresh lava remained chilly until early January 2021.

Scientists confirmed pockets of steam emissions at the summit and on the sides, as well as discolored water around the island, in monthly overflights and observations. A new volcanic island formed approximately southeast of the existing Nishinoshima during the early phases of the 2013 eruption. The island was not given an official name but was mentioned in Japanese reports as “new island”: atarashii shima (新しい島) or shintō (新島).

The Tokyo VAAC announced the last ash release on August 27, 2020. JMA recorded no eruptive activity during an overflight on September 5th, but steam plumes were emerging from the summit crater. The shape of the pyroclastic cone and the coastline did not change significantly. The island will be named “when it is stable and clear that it will remain,” according to government authorities. “There is little chance it will be named as a separate entity,” because the island has now amalgamated with Nishinoshima.

At this point in the arc, the primary magma composition has shifted from basalt, which was formed at a great depth, to andesite, which was formed underneath the existing thinner crust. The thermal and mechanical evolution of the mantle wedge and the underlying lithosphere is reflected in this. Around the western side of the island, yellowish brown stained water developed, and a high temperature was still observed on the crater’s inner wall. On the 28th of October 2020, steam plumes and high temperatures were observed at the summit crater, and brown stained water was observed on the island’s southern coast, but there were no additional evidence of volcanic activity.

Nishinoshima was a small, green island with no eruptions in the previous 10,000 years before 1974. The island was only the pinnacle of an undersea volcano that stood 3,000 meters (9,800 feet) tall and was 30 kilometers (19 miles) broad at its base. It’s thought that continental crust-like andesitic magma is currently building up beneath undersea volcanoes on thin arc lithosphere, and that it was previously building up beneath such volcanoes. The island used to be roughly 650 meters (710 yards) long and 200 meters (220 yards) broad. According to a 1911 survey, the caldera’s deepest point was 107 meters (351 feet).

To the south, west, and northeast of the volcano, there are numerous enormous submerged satellite cones. Around 9 km (6 km) SSE of Nishinoshima, the southern cone rises to within 196 m (643 ft) of the surface. Researchers aboard the Maritime Meteorological Observatory’s marine weather observation ship “Ryofu Maru” confirmed that there was no continuous eruptive activity on 2nd November 2020. They noticed steam issuing from many fractures on the cooling surface of the lava flow area on the pyroclastic cone’s north flank, in addition to steam plumes at the top. During an overflight on November 24, 2020, only steam plumes from inside the summit crater were visible.

BirdLife International has designated the island and its surrounding seas as an Important Bird Area (IBA) because it is home to a population of greater crested terns. On the 7th of December, a steam plume erupted from the summit crater’s inner wall, and thermal imaging revealed that the area was still hot. On the SE and SW shores, brown stained water was reported. During the 15-29 December 2020 period, researchers aboard a ship from the University of Tokyo’s Earthquake Research Institute and the Marine Research and Development Organization recorded continuing steam plumes in the summit crater, surrounding the lava flows on the N slope, and along the S coast.

Biologists have been curious about how flora and wildlife would populate Nishinoshima since the eruption in 2013. Organic materials, primarily produced by breeding birds in the form of feathers or faeces, is predicted to enrich the island surface, allowing plants to thrive. Researchers were also urged not to bring outside species to Nishinoshima to avoid interfering with the colonization process. Andesites formed by this shallow and hydrous mantle melting could aggregate through plate collisions to form continental crust. During an overflight by the Japan Coast Guard on January 25, 2021, steam plumes and increased temperatures were still measured inside the summit crater, and discolored water persisted on the SE and SW beaches; there was no evidence of eruptive activity.