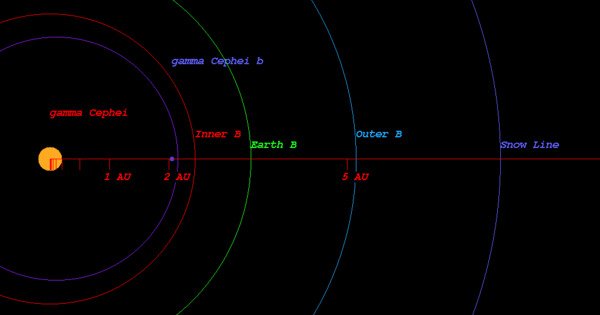 Gamma Cephei b is an exoplanet in the K-type star system. It has a mass of 9.4 Jupiters, takes 2.5 years to complete one orbit around its star, and is 2.05 AU away from it. Its discovery was made public in 2003.

The mass of Gamma Cephei B is approximately 0.40 times that of the Sun. It is most likely an M4 red dwarf, 6.2 magnitudes fainter than the primary. It is assumed to be about the same age as its primary. Gamma Cephei has an apparent magnitude of 3.21, which is nearly entirely accounted for by Gamma Cephei A. The primary is approximately 3.25 billion years old and has evolved away from the main sequence, having burned through all of the hydrogens in its core.

At first glance, it appears that two planets at PSR 1257+12 were the first confirmed exoplanets in the NASA exoplanet archive. However, they both orbited the same pulsar, which is the dense remnants of a supernova. These planets were followed in 1995 by 51 Pegasi b, an exoplanet roughly half the size of Jupiter that was so close to its sun-like star that its orbit was only 4.2 days — the first discovered around a Sun-like star.

In 1988, a planet orbiting Gamma Cephei A with a period of 2.7 years was discovered. It was also announced in 1989 that it existed. This was the first confirmed extrasolar planet, and its ostensible discovery was based on the same radial velocity technique that others would later use successfully. The claim was challenged in 1992 by a paper that supported K-giant variability with a period equal to the stellar rotation, but the existence of a planet with an orbital period of about 2.5 years was confirmed in 2002. 260 Light Years Away, a New Study Describes an Atmosphere on “Hot Neptune” that “Shouldn’t Exist”