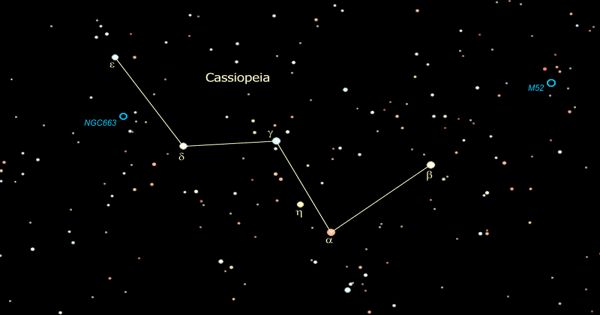 TZ Cassiopeaie – a Variable Star in the Constellation Cassiopeia

TZ Cassiopeaie is a very luminous Supergiant Star-type star. It is a variable star in the constellation Cassiopeia with an apparent magnitude of around +9 to +10. It is not part of the Cassiopeia constellation outline but is within the borders of the constellation. It is approximately 8,000 light-years away from Earth. The star is a red supergiant star with a spectral type of M3 and a temperature below 4000 Kelvin. The star cannot be seen by the naked eye, you need a telescope to see it.

Williamina Fleming reported variable TZ Cassiopeiae, which was published posthumously in 1911. It’s a slow irregular variable star with a period of up to 3,100 days. The supergiant star’s location in the night sky is determined by the Right Ascension (R.A.) and Declination (Dec.), which are equivalent to Longitude and Latitude on Earth. It has over 60,000 times the luminosity of the Sun and is 645 times larger. It is part of the Cas OB5 stellar association, which also includes the nearby red supergiant PZ Cassiopeiae.

The initial mass of TZ Cassiopeiae has been estimated to be around 15 M based on its position relative to theoretical stellar evolutionary tracks. All-stars, including planets, orbit around a central point, which in the case of planets is the Sun. It is the galactic center in the case of a star. The constellations we see today will be different from those seen 50,000 years ago or 50,000 years.

TZ Cas is losing mass at a rate of two-millionths of a solar mass per year due to a powerful stellar wind. It’s unclear whether this is enough to cause the star to lose its atmosphere and turn into a blue supergiant before the core runs out of fuel and explodes as a supernova. The apparent magnitude of TZ Cassiopeiae is 8.80, which is a measure of the brightness of the star as seen from Earth. It will inevitably end its life violently in a supernova explosion, whether it is a red or blue supergiant or a Wolf–Rayet star when the core collapses.