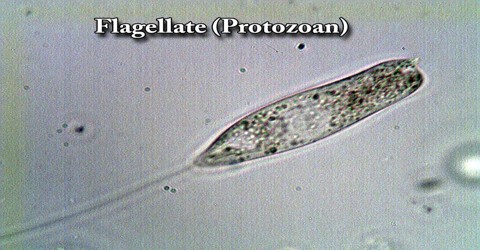 Flagellate is a protozoan that moves by means of a flagellum or flagella. Some flagellates, such as the euglena, can make food by photosynthesis like plants, while others, such as the trypanosomes, are parasitic and cause disease. The word flagellate also describes a particular construction (or level of organization) characteristic of many protists (eukaryotic organisms) and their means of motion. The term presently does not imply any specific relationship or classification of the organisms that possess flagellae. 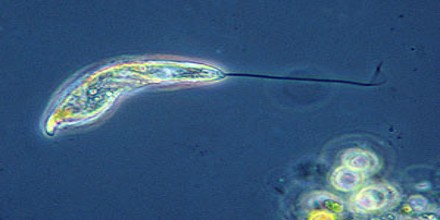 Members of the class Zoomastigophorea are colourless, animal-like protozoans—e.g., symbiotic hypermastigids. Zooflagellate species in the digestive tracts of termites and roaches enable these insects to utilize the nutrients in cellulose.

Structure and Function of Flagellate

It possesses a bilateral symmetrical body with organelles occur­ring in pairs and measures 10-18 μm length. The body of trophozoite is a ‘tear-drop shaped’ with a convex dorsal surface and a concave ventral one. Flagella occur in four pairs (anterior pair, posterior pair, ventral pair and caudal pair). Two nuclei occur at the broader end of the body. 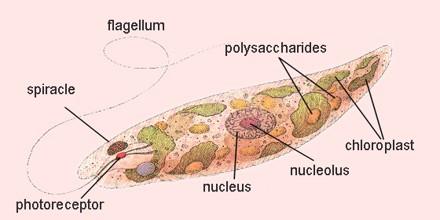 The fully formed cyst is oval in shape and measures 12 μm long by 7 μm broad. The cyst wall is thin and the organism does not fill the entire cyst. There are four nuclei which may remain clustered at one end or lie in pairs at opposite poles. The remains of the disintegrated flagella forming a central ‘streak’ visible in iodine and the margins of the sucking disc may be seen inside the cytoplasm.

Flagellate is actually used by cells and unicellular organisms for movement, sensation and signal transduction. They can be described as long slender extensions of the cell or organism. The singular form of flagellate is flagellum.

Depending on the organism, a flagellum consists of different structures. In bacteria, flagellates are made of the protein flagellin. In eukaryotes, flagellate consists of microtubules surrounded by a plasma membrane. This is the structure of flagellate in plants, protists and animals. Prokaryotes and eukaryotes use different sources of energy to drive the flagella. Moving eukaryotic flagellate require adenosine triphosphate (ATP). Prokaryotes use energy from the proton-motive force, which is the ion gradient that lies across the cell membranes. 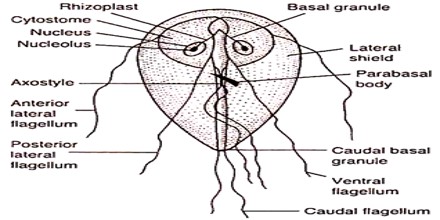 In the trophozoite stage Giardia undergoes multiplication in the upper part of the intestine by binary fission. When conditions in duodenum are unfavourable, encystment takes place, usually in the large intestine. An acid envi­ronment often causes the parasite to encyst. During encystment, a tough resistant wall is formed by the parasite and the cell undergoes division to produce two cells within the cyst. Infection in man is occurred by ingestion of cysts within about 30 minutes of ingestion, the cyst hatches out two trophozoites in the host’s intestine which then multiply in enormous number and are colonised or confined in the small intestine, parti­cularly the duodenum. Giardia often invades the bile ducts to avoid the high acidity of duodenum.