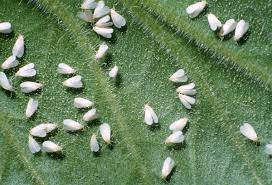 Now a days whitefly has become the most serious pest in the many region of the world. These insects feed on the underside of leaves. They can reduce plant vigor and cause a number of plant disorders and viruses. They reproduce quickly and spread at a rapid rate.

Whitefly predators eat from 150 up to 600 whitefly eggs per day and It takes about 30 seconds to eat a single Whitefly egg.

Above all discussion it is that the biological control of white fly is very much significant.
MATERIALS AND METHOD

The objectives of this study

1. To take idea about the biological controlling agents of white fly in the world.
2. To know the possible technique which is eco-friendly.
3. To give emphasis on the practices which are not harmful to us.

Whitefly Bemisia tabaci belonging to the family Aleyrodidae and under the order homoptera it has sueking type mouthparts by which it occurs the sucking function easily. It is white in color and very small in size. It causes serious damage on crop plant mainly tomato, okra, sweet potato etc. It also act as a vector of several virus disease in plants such leaf curl virus, yellow leaf curl virus, yellow top virus etc. It secretes honey dew and developed shooty mould fungus and finally reduce photosynthesis
PREDATORS:

The organisms those are usually larger than prey, always kills host, more than one prey is required to complete its development is called predator.

Bemisia tabaci is attacked by predatory species representing eight arthropod orders, including members of the families Phytoseiidae (Acari), Coccinellidae (Coleoptera), Syrphidae (Diptera), Anthocoridae, Nabidae, and Miridae (all Hemiptera), Chrysopidae and Coniopterygidae (both Neuroptera). At least four species of predators that are commercially available have been evaluated for their ability to control B. tabaci strain B on greenhouse grown crops; Delphastus pusillus LeConte, Macrolophus caliginosus Wagner, Chrysopa carnea, and Chrysoperla rufilabris (Burmeister). (Mark S. Hoddle, 1999).
Delphastus pusillus (Coleoptera: Coceinellidae): sometimes called the whitefly destroyer, is a very small, black lady bird beetle that attacks all stages of whiteflies, but prefers eggs and nymphs. The females lay their eggs within clusters of whitefly eggs. Adults can consume 160 eggs or 12 large nymphs every day. A larva consumes 1000 whitefly eggs during its development. These beetles perform best at temperatures between 65 and 90°F, with relative humidity above 70% . These predators can be used in combination with Encarsia species (Cloyd, et.al. 1999).

Delphastus pusillus, Delphastus pusillus is often associated with high density populations of whiteflies and feeds readily on B. tabaci. Adults and immature beetles feed by piercing the whitefly integument and extracting the contents resulting in a flattened, empty whitefly cuticle. Adults and all larval stages will feed on whitefly eggs, nymphs, and adults. (Mark S. Hoddle, 1999).

Chrysoperla spp. (Neuroptera: Chrysopidae): Ten species of lacewings have been reported to feed on whitefly nymphs, including the commercially available species C .carnea and C .rufilabris The three larval stages of C. carnea will feed on B. tabaci and T. vaporariorum eggs, nymphs and pupae, C. rufilabris larvae will feed, on all immature stages of B. tabaci Mark S. Hoddle, 1999.

The predators that feed on various white flies.

The organisms those are often same size as host, always kills host, only one host is required to completed its development is called parasitoid. Peculiar characteristics have present for successful biological control in parasitoids. They are as follows:

1. Presence of specialized ovipositor for drilling to pierce the host to lay eggs.
2. To inject paralyzing venom into the host.
3. Tip of ovipositor sometimes having very sensitive sense organ to predict the suitability of the host.

The most common parasitoids attacking Bemisia in Florida are in two genera, Encarsia and Eretrnocerus, Encarsia pergandiella and Encarsia transvena are common throughout the state, while Encarsia nigricephala is common in north central Florida. Several species of Eretmocerus are also common throughout the state. Eretmocerus species cause mortality to whiteflies by host-feeding, in addition to parasitism. (Heather J. et.al. 2000).

Eretmocerus eremicus (Hymenoptera: Aphelinidae) Females oviposit under suitable hosts, and parasitoid larvae, after hatching, penetrate the ventral surface of the host and develop as endoparasitoids inside the host. Eretmocerus eremicus host feeds by inserting its ovipositor in the vasiform orifice of the host. Weekly releases (three female wasps per plant per week) of E. eremicus have proven to be more effective than the same release rate of E. formosa for controlling B. tabaci (Mark S. Hoddle, 1999).

Much mortality is caused by minute parasite wasps (parasitoids) is the aphelinid family, Female parasitoids lay their eggs inside the whitefly nymph or between the whitefly and the leaf surface, depending on the genus of wasp. The immature parasitoids develop within the whitefly host, eventually consuming the entire host, except the integument (Heather J. et.al. 2000).

The parasitic wasp Encarsia formosa preys on immature whiteflies and is commonly used for greenhouse whitefly. Encarsia wasps kill whitefly nymplus in one of two ways; they either lay an egg inside the nymph, providing food for their young, or they kill the nymph right away and feed on the fluids inside of it (Gill, Stanton, 2000).

Two other wasp parasites, Encarsia luteola and Eretmocerus californicus are commercially available for control of these species (Anon. 1995).

Mark has also compared the effectiveness of Encarsia formosa and Eretmocerus californicus on silver leaf whitefly. In a 1996 study, both parasitoids controlled whiteflies at a 99% control rate (Grossman, Joel,1996).

Parasitoids that feed on various whitefly.

Beauveria bassiana and Verticillium lecanii, two fungal pathogens with efficacy against Bemisia and other insects, have been commercialized and are available for field and greenhouse application against Bemisia, (Heather J. et.al. 2000).

Beauveria bassiana- Beauveria bassiana is a naturally occurring fungus disease that affects a very wide range of insects – including aphids, whiteflies, psyllids, billbugs and caterpillars. Newly infected insects often are somewhat light brown; when the fungus sporulates it covers the insect with white spores. Available formulations are sold as Mycotrol and Naturalis.

Pathogens that feed on various whiteflies

The various whitefly species and biotypes look very much alike, but they have subtle physiological differences. These differences can cause them to respond differently to control strategies. Because control measures must be selected according to the type of whitefly present, accurate identification is critical to successful control. Above all discussion the biological controlling agents related to various species of white flies are whitefly predator, Green Lacewings, Pirate Bugs, Greenhouse whitefly Parasite, Sweet potato Whitefly Parasite, Beauveria bassiana.

Detection of Seed Born Fungi of Some Selected Medicinal Plants

Developing Countries in the World Trade in Agricultural