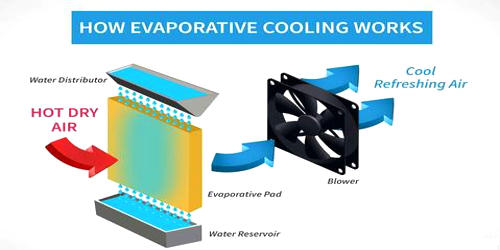 An evaporative cooler (also known as swamp cooler or wet air cooler) is a device that cools air through the evaporation of water. Evaporative cooling differs from typical air conditioning systems, which use vapor-compression or absorption refrigeration cycles. Evaporative cooling uses the fact that water will absorb a relatively large amount of heat in order to evaporate (that is, it has a large enthalpy of vaporization). It offers an eco-friendly and cost-effective way to cool spaces indoors and outdoors. It also recycles the indoor air through cross ventilation whereas air conditioners only recycle the ambient air which may increase the number of pollutants present in an indoor environment. It should also be noted that evaporative coolers use only water and no chemical refrigerants, which are harmful to the ozone layer.

The temperature of dry air can be dropped significantly through the phase transition of liquid water to water vapor (evaporation). This can cool air using much less energy than refrigeration. An evaporative air cooler is a type of air conditioner that works by harnessing the power of evaporation to cool air temperatures. When operating an evaporative cooler, windows are opened part way to allow warm indoor air to escape as it is replaced by cooled air. An evaporative cooling system takes basic evaporation and automates it to efficiently lower the temperature of the air in your home. In extremely dry climates, evaporative cooling of air has the added benefit of conditioning the air with more moisture for the comfort of building occupants.