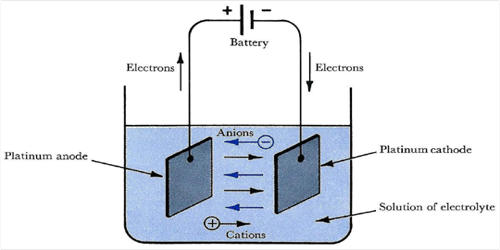 An electrolyte is a substance that produces an electrically conducting solution when dissolved in a polar solvent, such as water. The most familiar electrolytes are acids, bases, and salts, which ionize when dissolved in such solvents as water or alcohol. The dissolved electrolyte separates into cations and anions, which disperse uniformly through the solvent. It is a chemical compound that dissociates into ions and hence is capable of transporting electric charge – i.e. an electrolyte is an electric conductor; unlike metals, the flow of charge is not a flow of electrons, but is a movement of ions.

These solutions conduct electricity due to the mobility of the positive and negative ions, which are called cations and anions respectively. Electrically, such a solution is neutral. If an electric potential is applied to such a solution, the cations of the solution are drawn to the electrode that has an abundance of electrons, while the anions are drawn to the electrode that has a deficit of electrons. Strong electrolytes completely ionize when dissolved, and no neutral molecules are formed in solution. The movement of anions and cations in opposite directions within the solution amounts to a current. Many salts, such as sodium chloride, behave as electrolytes when melted in the absence of any solvent; and some, such as silver iodide, are electrolytes even in the solid-state. This includes most soluble salts, acids, and bases. Some gases, such as hydrogen chloride, under conditions of high temperature or low pressure, can also function as electrolytes. The primary electrolytes required in the body fluid are cations (of calcium, potassium, sodium, and magnesium) and anions (of chloride, carbonates, amino acetates, phosphates, and iodide).

Electrolyte solutions can also result from the dissolution of some biological (e.g., DNA, polypeptides) and synthetic polymers (e.g., polystyrene sulfonate), termed “polyelectrolytes”, which contain charged functional groups. A substance that dissociates into ions in solution acquires the capacity to conduct electricity. Sodium, potassium, chloride, calcium, magnesium, and phosphate are examples of electrolytes. They are the most important in nutrition are sodium, potassium, calcium, magnesium, and phosphate. When these minerals dissolve in a fluid, they form electrolytes — positive or negative ions used in metabolic processes. Common electrolytes that are measured by doctors with blood testing include sodium, potassium, chloride, and bicarbonate.

In medicine, electrolyte replacement is needed when a person has prolonged vomiting or diarrhea, and as a response to strenuous athletic activity. They are involved in many essential processes in your body. Commercial electrolyte solutions are available, particularly for sick children (such as oral rehydration solution, Suero Oral, or Pedialyte) and athletes (sports drinks). Therefore, you need to get an adequate amount of electrolytes from your diet to keep your body functioning as it should. Electrolyte monitoring is important in the treatment of anorexia and bulimia. In nutrition, the term refers to essential minerals found in your blood, sweat, and urine.