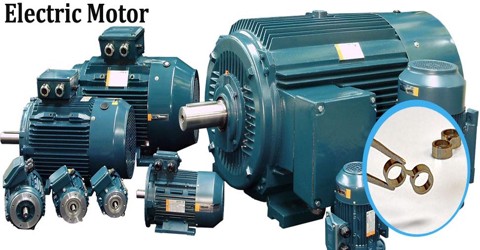 Electric motor is a device that converts electrical energy to mechanical torque. In other words, the devices which produce rotational force are known as the motor. In certain applications, such as in the transportation industry with traction motors, electric motors can operate in both motoring and generating or braking modes to also produce electrical energy from mechanical energy. Electric motors are also used to produce linear or rotary force, and should be distinguished from devices such as magnetic solenoids and loudspeakers that convert electricity into motion but do not generate usable mechanical powers, which are respectively referred to as actuators and transducers.

Electric motors work on the principles of electromagnetism. When charges are still, they create electric fields. But when charges move, they instead produce magnetic fields. A current in a wire, for example, produces its own magnetic field. This is what we exploit in an electric motor to create movement. When a current was passed through the wire, the wire rotated around the magnet, showing that the current gave rise to a close circular magnetic field around the wire. This motor is often demonstrated in physics experiments, brine substituting for toxic mercury. Though Barlow’s wheel was an early refinement to this Faraday demonstration, these and similar homopolar motors were to remain unsuited to practical application until late in the century. An electric motor contains a coil of wire that creates a magnetic field when electricity flows through it. This is collectively known as an electromagnet. It turns out that when a current flow through a magnetic field, the charges feel a magnetic force on them at 90 degrees to the direction they’re moving. Because of this, the wire as a whole feels a big force. And this force causes the loop of wire to move; electrical energy has been changed into movement.

Among the four basic classifications of motors mentioned above the DC motor as the name suggests, is the only one that is driven by direct current. It’s the most primitive version of the electric motor where rotating torque is produced due to flow of current through the conductor inside a magnetic field. Its work depends on the basic principle that when a current carrying conductor is placed in a magnetic field, then a force exerted on it, and torque develops. The DC motor is classified into two types, i.e., the self-excited motor and separately excited. In another type of AC motor where rotating magnetic field cuts the rotor conductors, hence circulating current induced in these short circuited rotor conductors. Due to interaction of the magnetic field and these circulating currents the rotor starts rotates and continues its rotation. It is classified into three types; they are the induction motor, synchronous motor, the linear motor.

Electric motors operate on three different physical principles: magnetic, electrostatic and piezoelectric. By far the most common is magnetic.

In magnetic motors, magnetic fields are formed in both the rotor and the stator. The product between these two fields gives rise to a force, and thus a torque on the motor shaft. One, or both, of these fields must be made to change with the rotation of the motor. This is done by switching the poles on and off at the right time, or varying the strength of the pole.