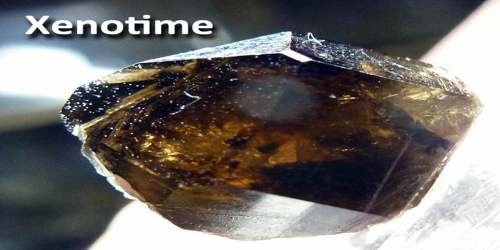 Xenotime is a phosphate mineral, similar to monazite except enriched in the heavy lanthanides and yttrium. It is a rare earth phosphate mineral. The rare earth elements dysprosium, erbium, terbium and ytterbium as well as metal elements such as thorium and uranium (all replacing yttrium) are the expressive secondary components of xenotime. It is a widely spread mineral throughout the world although good crystals and therefore specimens are somewhat hard to find. The name is from the Greek word meaning “vain honour,” because the yttrium in xenotime was mistakenly thought to be a new element. The criticism was blunted, as over time “kenotime” was misread and misprinted “xenotime”. Xenotime was first described for an occurrence in Vest-Agder, Norway in 1824. The crystals of xenotime are similar to zircon and can easily be confused with the duller lustered, less transparent samples of zircon. However, the cleavage and the softness of xenotime are sufficient to distinguish them.

Occurrences and Properties of Xenotime

The mineral occurs in pegmatite veins, as a minor accessory mineral in granites and crystalline metamorphic rocks. It is also found as a heavy residual mineral in the sands of streams. It is found in pegmatite veins at Hittero, Moss, and other places in Norway; at Ytterby, Sweden; in the granites of Minas Geraes, Brazil, and the Khyber area of Pakistan. It is found with the residual heavy minerals in the placer gold nugget washings at Clarksville, Georgia, and many places in North Carolina. It is also found in pegmatite veins in Alexander County in the same State. It occurs in schist rocks in Music Valley in southern California and in Colorado. It is recovered as a minor ore mineral in many heavy sand recovery operations which are worked primarily for monazite and other elements in Brazil, India, South Africa and Australia. It is also recovered as an alluvial heavy material in association with Malaysian casseterite tin mining. Xenotime is a minor rare earth ore mineral, being rich in the heavy lanthanide elements, especially the even numbered lanthanides. Like monazite, the mineral must be chemically dissolved to separate the various rare earth elements. There are two major uses for xenotime. Due to its high yttrium content, it is tapped as a majorsource of such. Yttrium, in turn, is used for creating yttrium-aluminum garnet lasers and yttriumiron garnet microwave filters. It is also a chief source of heavy lanthanide metals such asdysprosium which is used in lasers and creation of rare earth magnets; erbium, a rare earth metalused in lasers as well as in the creation of vanadium steel; gadolinium, another rare earth metalwhich appears as a major component in various technological applications such as highrefractive glass, rare earth magnets, and lasers, and as an MRI contrasting agent and an NMRrelaxation agent; and ytterbium, a primary component in the manufacture of infrared lasers aswell as an ingredient in chemical reducing agents.Xenotime is also tapped as a gemstone. Fine crystals of xenotime are carefully cut to createbrownish yellow gemstones. However, xenotime’s relative softness (4.5 in the Mohs scale ofhardness) makes it a challenging crystal to work with.