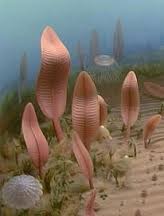 The actual Ediacara biota contained enigmatic tubular and frond-shaped, mostly sessile creatures that lived through the Ediacaran Period. Trace fossils these organisms have been recently found worldwide, and represent the first known complex multicellular creatures. The Ediacara biota radiated in a event called the Avalon explosion, 575 million in years past, after the Globe had thawed in the Cryogenian period’s comprehensive glaciation.