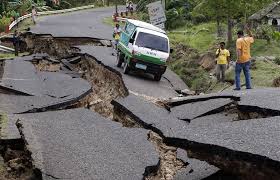 Japan is one of the East Asian country. It holds third economic position in the world. Japan accounted for about 10 percent of the world’s economic activity through occupying only 0.3 percent of the world’s surface and supporting about 3 percent of the world’s population. But sometimes Japan faces some natural disasters like frequent earthquake and Tsunami. These natural disasters affected Japan’s social, economic and environmental sectors. Like the very recent earthquake and Tsunami made the Japan as a wreckage. It caused extensive and severe structural damage in Japan, including heavy damage to roads and railways as well as fires in many areas, and a dam collapse. Around 4.4 million households here left without electricity and 1.5 million without water. The International Atomic Energy Agency- described the crisis as “extremely serious”. Though these types of natural disaster suffered Japan for long time, its heavy economy supports it to cover up the destruction. The recent destruction of Japan for earthquake and  Tsunami will be covered up soon, if Japan economy starts to run properly.

The 9.0 magnitude (Mw) undersea mega thrust earthquake occurred on 11 March 2011 at 14:46 JST in the western Pacific Ocean at a relatively shallow depth of 32 km with its epicenter approximately 72 km east of the Oshika Peninsula of Tohoku, Japan, lasting approximately six minutes. The nearest major city to the quake was Sendai, on the main island of Honshu, 130 km away. The quake occurred 373 km from Tokyo. The main earthquake was preceded by a number of large foreshocks, and hundreds of aftershocks were reported. United States of Geological Survey director Marcia McNutt explained that aftershocks follow Omori’s Law, might continue for years, and will taper off in time.

One minute before the earthquake was felt in Tokyo, the Earthquake Early Warning system, which includes more than 1,000 seismometers in Japan, sent out warnings of impending strong shaking to millions. The early warning is beloved by the Japan Meteorological Agency (JMA) to have saved many lives.

The earthquake which was caused by 5 to 8 meters upthrust on 180-km wide seabed at 60 km offshore from the east coast of Tohoku resulted in a major tsunami which brought destruction along the Pacific coastline of Japan’s northern islands and resulted in the loss of thousands of lives and devastated entire towns. The tsunami propagated across the Pacific, and warnings were issued and evacuations earned out. In many countries bordering the Pacific, including the entire Pacific coast of North and South America from Alaska to Chile, however, while the tsunami was felt in many of these places, it caused only relatively minor effects. Chile’s section of Pacific coast is one of the furthest from Japan, at about 17,000 km (11,000 mi) away, but still was struck by tsunami waves 2 m (6.6 ft) high. A wave height of 37.9 meters (124 ft) was estimated at Taro, lwate.

These readings were obtained from recording stations maintained by the JMA around the coastline of Japan.

Earthquake and Tsunami in Worldwide :

The earthquake and Tsunami in Japan, 11 March, 2011 is the most destructive in the history. By this Tsunami it was seen that about 10 feet height swelling of water over flowed many areas of Japan. Some country near Pacific ocean were also over flowed. A short history of ten most powerful earthquake after 1900 is presented here. Most of them created Tsunami and the result was a lot of destruction.

Ecuador and Columbia earthquake and Tsunami was 8.8 magnitude and around 1000 people were dead. Middle Amercia, Sun Francisco and Japan were also faced it.

Russia earthquake and Tsunami was 9.0 magnitude. It was spread upto HawaiIsland. But no one was injured or dead.

Alaska had 8.6 magnitude earthquake. By this earthquake to the Umnak Island’s Visovidok volcano was opened after 200 years. On that time around 50 feet high Tsunami occurred in HawaiIsland.

This earthquake was happened in Chili with 9.5 magnitude. 5 thousand people were dead and 20 lakh people lost their house.

The US Alaska faced it with 9.2 magnitude. About 125 people were dead and destruction were about 31 crore dollar.

Alaska had 8.7 magnitude earthquake and then a 35 feet height Tsunami attacked ShomiaIsland.

A 9.1 magnitude attacked Indonesia Acheh province. As a result 2 lakh 26 thousand people were dead by Tsunami in Sri Lanka, Thailand, India and others 9 countries.

8.7 magnitude was in Indonesia and 300 people were dead.

Chili had 8.8 earthquake and about 5 hundred peoples were dead and about a destruction of 3 crore dollar was occurred.

North-East Japan had 8.9 magnitude earthquake and as a result 10 meter height Tsunami occurred. Besides Japan, Philippine, Taiwan, Indonesia, Columbia and Rome were alerted for Tsunami and earthquake.

The degree and extent of damage caused by the earthquake and resulting tsunami were enormous, with most of the damage being caused by the tsunami. These damage and effect are given below-

The Fukushima I, Fukushima II, Onagawa Nuclear Power Plant and Tokai nuclear power stations, consisting of a total eleven reactors, were automatically shut down following the earthquake. Higashidori, also on the northeast coast, was already shut down for a periodic inspection. Cooling is needed to remove decay heat after a reactor has been shut down, and to maintain spent fuel pools. The backup cooling process is powered by emergency diesel generators at the plants and at Rokkasho nuclear reprocessing plant. At Fukushima I and II tsunami waves overtopped seawalls and destroyed diesel backup power systems, leading to severe problems at Fukushima I, including three large explosions and radioactive leakage. Over 200,000 people were evacuated.

All of Japan’s ports were briefly closed after the earthquake, though the ones in Tokyo Wind southwards soon re-opened. Fifteen ports were located in the disaster zone. The north-eastern ports of Hachinohe, Sendai, Ishinomaki and Onahama were destroyed. Japan’s ninth-largest container port at Kashima were also affected though less severely.

The Fujinuma irrigation dam in Sukagawa ruptured, causing flooding and washing away homes. Eight people were missing and four bodies were discovered by the morning.

In the immediate aftermath of the calamity, at least 1.5 million households were reported to have lost access to water supplies. By 21 March 2011, this number fell to 1.04 million.

An analyst estimates that consumption of various types of oil may increase by as much as 300,00 barrels per day (as well as LNG), as back-up power plants burning fossil fuels try to compensate for the loss of 11 GW of Japan’s nuclear power capacity.

Japan’s transport network suffered severe disruptions. Many sections of Tohoku Expressway serving northern Japan were damaged. The expressway did not reopen to general public use until 24 March, 2011. All railway services were suspended in Tokyo.

Cellular and landline phone service suffered major disruptions in the affected area. On the day of the quake, American broadcaster NPR was unable to reach anyone in Sendai with working phone or Internet.

JAXA (Japan Aerospace Exploration Agency) evacuated the TsukubaSpaceCenter in Tsukuba, Ibaraki. The center, which houses a control room for part of the international space station, has been shut down, with some damage reported.

Socio-economic impact of earthquake and tsunami :

It is still too early to tell what the full impact of the March 11 earthquake, tsunami, and growing nuclear crisis on Japan’s infrastructure, industrial base, and economic growth will be—let alone the broader global impacts. Nevertheless, past natural disasters and disruptive events (the Kobe earthquake of 1995, 9/11, and Hurricane Katrina in 2005) give us some idea of the likely economic effects (and timeline) of this horrific event. The economic impacts of these events are typically large for a quarter or two after the event, and are mostly concentrated in the region of the disaster. After about two quarters, however, growth is boosted by the reconstruction effort. At the national level, the impact on economic growth is usually noticeable but small (a few tenths of a percent). In the case of Japan’s most recent calamity, given the damage to the electricity power generation capacity, the impact on economic growth could be greater.

Impact on Bangladesh of Earthquake and Tsunami in Japan:

For the destruction of Japan’s economy Bangladesh also faced some problems. Japan-Bangladesh both have a friendly relation. Now the impact on Bangladesh is described bellow-

The Japan is now a wreckage area. But it is not a fact if Japan economy run properly at last 2 weeks- then the economy of Japan will have the proper step to solve the whole crises and rebuild the destructed Japan. The earthquake and Tsunami are regular natural disaster in Japan. They are used to face it. But the recent disaster is really became a threat for Japan social-economic sector. Japan’s economy would be rebuild and then become developed as before, with holds more than 10% of world economy by come back to its track.