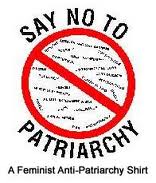 From the beginning of the civilization the women were in the “four walls” in the faming and the house. The Demand of the human being is changeable for that our society and civilization were introduced by the combined perseverance of male and female. The position of women in society is the way to demonstrate the position of the society. National the dignity and behavior of women can indicate the motion of the society.

In the present situation of women in the third world are not the positively increasing. Bangladesh is a developing country in the third world. The women in Bangladesh is gradually influence in their family and society with their own and willing participation. Though there is some problems to participate in all sphere of the country. Till now the women are dominated by men in our society. So I would like to discuss about the patriarchy and the subordination of women in perspective of Bangladesh.

Some people do believe that men are born to dominate and women to be subordinate. They believe that (his hierarchy has always existed and will continue, and that like other rules of nature this one too cannot be changed. There are others who challenge these beliefs say that patriarchy is not natural, it is man-made and therefore it can be changed. It has not always existed, it had a beginning and therefore it can have an end. In fact for over a hundred years, this debate has been going on between those who believe patriarchy  is natural and universal and those who say it is not. Here we will briefly introduce the main theories put forward by feminists regarding the existence and origin of patriarchy; readers are encouraged to refer to other writings, as well, for a deeper understanding.

Patriarchy is a key concept in Marxist and socialist feminism, although explanations and interpretations, again not necessarily mutually exclusive vary form the biological (women are weaker) to the economic (women provide domestic support for the working male, and a cheap army of reserve labor) to the cultural (Masculinity skills are valued above feminity and traditionally female skills) Basically we know that patriarchy means of society where women are dominated by men or rule by the father.

According to science dictionary –

Patriarchy – is a “ family or society in which authority is vested in males, through whom decent and inheritance are traced”

“Patriarchy is a androcentric social system in which the role of the gather is central to social organization, and where fathers hold authority over women, children and property. Historically, the principle of patriarchy has been central to the social, legal, political, and economic organization of Hebrew, Greek, Roman. Indian and Chinese cultures, and has had a deep Influence on modern Civilization.

Most forms of feminism characterize patriarchy as an unjust social system that is oppressive to women. In feminist theory the concept of patriarchy often includes all the social mechanisms that reproduce and exert male dominance over women.

Patriarchy is a multidimensional condition of power/status. Whyte’s 1978 comprehensive study examined 52 indicators of patriarchy, to which corresponded 10 relatively independent dimensions. The ten dimensions are-

The word patriarchy literally means the rule of father or the “patriarch” and originally it was used to described a specific type of “male dominated family” Now it is used more generally to refer to male domination, to the power relationships by which men dominate women, and to characters a system whereby women are kept subordinate in a number of ways. The subordination what we experience at a dials level, regardless of the class we right belong to, takes various forms – discrimination disregard, insult, exploitation, oppression, violence with the family, at the place of work in society. The details may be different, but the theme is the same.

So, I would like to discuss about patriarchy and subordination of women in perspective of Bangladesh.

BD is a that kind of country which is primarily, patriarchal and patrilocal in nature, this reflects from patriarchal system.  Gender discrimination in Bangladesh, begins at birth, for that the work of the women are considered as the domestic or the academic. For example the hearth become cleaning, washing, giving birth and rearing children become their jobs. In the post was period women started joining the work force, contributing to family income and thus started exercising and influence on family affair.

This paper seeks to examine the position and status of women in Bangladesh in relation to the interplay of religion and politics. Religion obstacle is one of the major causes of women subordination. Fatwa is anther obstacle of women subordination in Bangladesh. The rising incidence of community violence, through Use of extra judicial verdict by local elites or religious leaders (Fatwa) which punishes “ anti – social and immoral behavior” is a grave concern for women’s movement. In response to the pressure created by women’s rights and human rights organist ions, a division bench of High Court ruled in 2001 that all Fatwas are illegal and unauthorized as these are not compatible with the rule of law. swept – wearing – page – 23.

Unchangeable male angle of vision is another causes of women subordination. Without the permission of father the female members of the family can not make any decision. Though we can see the prime – minister and the opposition leader are also female but they failure to give equal rights and dignity in our society. If the angle of vision of male person of a family then the women or female can contribute in making decision by the side of male person of the family. Our social system is like that male person is all in all and female’s will be the back and call of the male person of a family. To remove these types of idea from our society female should be conscious about their right and should be educated.

In accordance with our law child marriage and downy system punitive offence. But in the patriarchal family in local areas and villages are oblige to mammy their female Childs. 75% of the cities of Bangladesh are not conscious about child marriage and the law. In this way patriarchal social system is responsible for the subordinating of women in our society.

Women in Bangladesh live in a social system where socialization process embodying social norms and role expectation prescribe for women an interior and subordinate position in society. Political socialization has been defined as the ‘interaction between social system and an individual whereby both predisposition for and skills relating to participation in the political sphere is internalized’ (Flora and Lynn. 1974). This view emphasizes the role of socialization in forming women political attitudes and aptitudes. The assumption is that this political orientation arises within the context of already established sex role and these basic roles are principally instilled in childhood. Green Stein, however, states that through differential opportunities. rewards and punishments which vary by sex and identification with one or the other parent, a sex identity is acquired. This learning process associates girls with the immediate environment inside home, and bovs with wider environment. As a result, women develop an unfavorable attitude towards politics which embraces wider environment. This adversely affects the participation of women in political activity.

Domestic work and the responsibilities of bearing and rearing of children keep women tied to home. These responsibilities not only keep women out of the labour force hut also limits their interest and serious involvement in politics. They hardly have any time to discuss political affairs and freedom to gain politically relevant experience. Studies (pomper, 1975) carried out on electoral behavior in the United States confirms the dampening  of having small children a, home on women s political  participation. Other studies show the situational constraint on women’s political behavior.

Economic dependence is a key factor that limits the political participation of women in Bangladesh. Studies in the United States (Anderson. 1975, Welch, 1977) find that employment, particularly outside home, is associated with dramatic increase in women’s political participation. In Bangladesh, women’s inferior economic status evidenced from their very low labour force participation rate as compared to men (only 4.5 percent as against 74 percent for men according to 1981 census), their unequal access to economic opportunities offered by state and society coupled with their unequal access to existing educational and skill training opportunities keep women economically dependent on men. This dependence is also an important factor that limits her freedom to participate seriously in politics. All the socio-economic disabilities of Bangladeshi women are reflected in her low participation in the political activities of the country.

Health is Universally regarded as an important index of human development and it is also a fundamental right of the population. In our society male person enjoy more facilities in health sector than female. For example  – A large number of adolescent girls suffer from malnutrition, early pregnancy is common among girls. Early pregnancy often exposes them to acute health risks during pregnancy and child birth. So we can say that in all sector of human being female are deprived and patriarchy is responsible for that.

Women are obliged to provide sexual service to their men according to their needs and desires. At the other and of the spectrum men may force their wives, daughter or other women in their control into prostitution, trading their sexuality is dominated thought an invocation of “shame” and honor. A radical feminist analysis sys that women under patriarchy are not only mother they are also sexual slaves. With the partial exception of mothers, the male culture defines women as sexual objects for male pleasure.

Media are overt important tools in the hands of upper class. Upper caste men to propagate class and gender ideology. From films and television to magazines, newspapers, radio, the portrayal of women is stereotypical and distorted. Messages about male superiority and female inferiority are respected constantly; violence against women is rampant especially in films. Other sectors, women are highly under-represented in the media.

Learning and education became formal and institutionalized, men have assumed control over whole areas of knowledge : philosophy, theology, law, literature, the arts, science. This male hegemony over the creation of knowledge marginalized women’s knowledge and experiences, their expertise and aspirations.

The Scenario of Bangladesh :

Bangladesh is a third world country. Most of the women in this country remain illiterate. They are lagging for behind in many ways.

Women constantly must fight for their right and sometimes they struggle just to survive without the power and domination of men threatening them. Whether an individual women wants to conquer patriarchy will come from her desire to be independent and defined outside the context of men.

In rural areas of Bangladesh, position of women is really near to the ground. They do not have much role in the decision making process of a family.

Women in Bangladesh are less focused in respect of studies and career than men. The literacy rate of female is upsetting. As a result of unawareness they are deprived of many rights.

Patriarchy is also found in family traditions like women taking the name of their husbands and children always carrying the father’s last name. More women are choosing to keep their maiden names or hyphenate with their married name so they can retain their own identity.

In our country women are more active than men. But there is no economic value of household chores. So, financially women in our country are not solvent.

Women may never truly win over patriarchy but they must continue to stand their ground whenever possible to change the tide in our society. It takes only small steps to start with and the more women who are bold in their world and don’t back down to men and their power, the better chance that women and men can be equals in life. Patriarchy is not natural, it is man made and therefore it can be changed, It has not always existed, it had a beginning and therefore it can have an end.